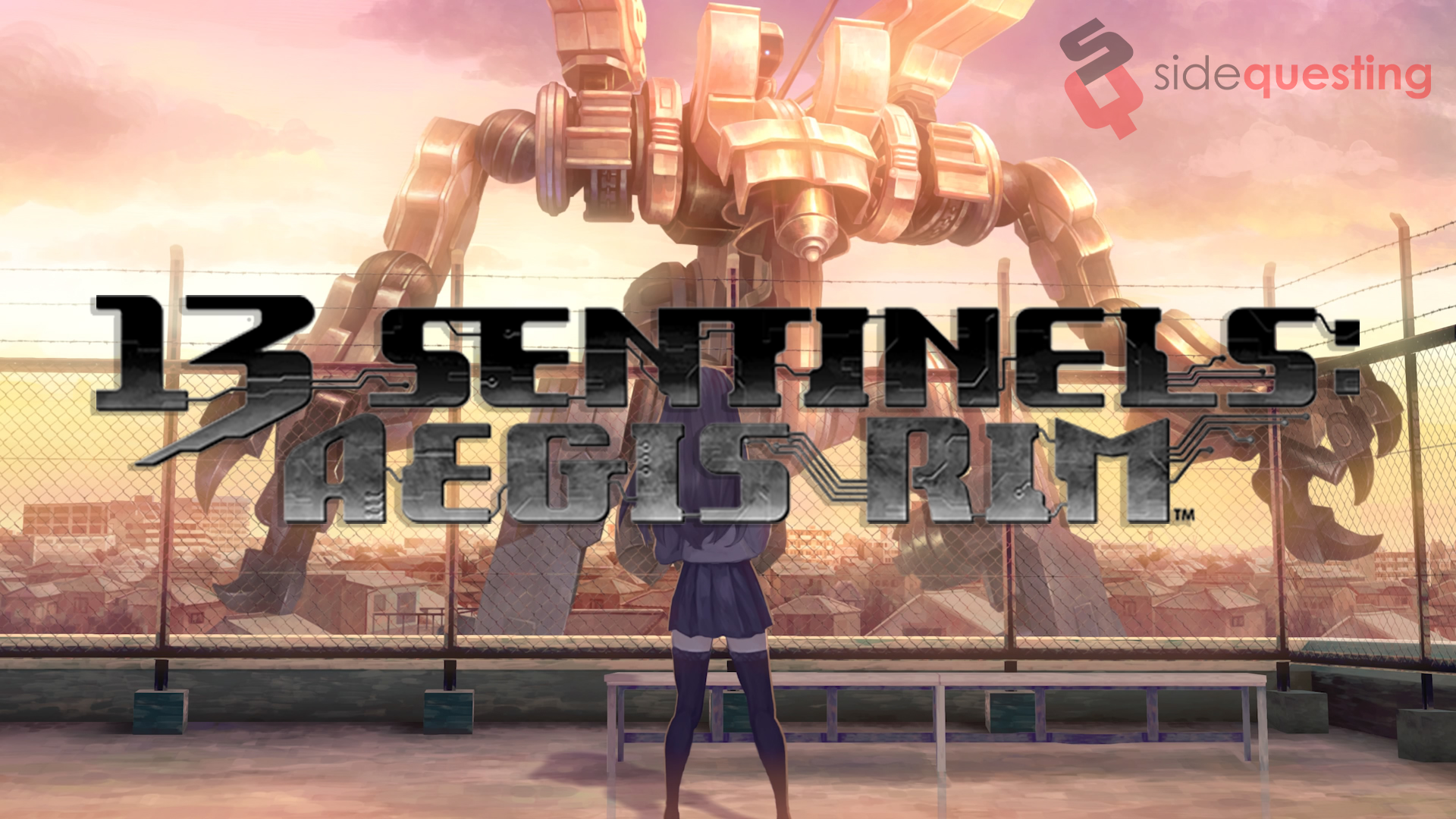 13 Sentinels: Aegis Rim represents something new for Vanillaware. It’s a sharp detour away from their usual foray into hand drawn 2D RPG beat-em ups, and while this might be disappointing to fans who come to the studio for bombastic fights with tight mechanics, Vanillaware has shown up to prove that they’re a force to be reckoned with in the space of interactive fiction. Somehow, Vanillaware has ended up making one of the most complex multilayered stories I’ve ever encountered in video gaming. It’s filled to the brim with themes, genres and alternating story structures while juggling hot button topics of self realization, sexuality, confidence, nationalism and the ethics of globalism, and wrapped up in a story that follows thirteen high-school students in a fictionalized 1980s Japan who are dragged into a futuristic war between mechas and hostile Kaiju.

The flow of 13 Sentinels: Aegis Rim is broken up into three separate parts: Destruction, Remembrance and Analysis.

Let’s start with the simplest section of the game first, Destruction. This section of the game is fine, albeit maybe too easy. This is the SRPG part of the experience which represents different times within the story where our characters have fought tough battles to defend their city. There are different generations of mecha that your characters are in, some can fly, some have support attacks and some just punch things. Instead of a grid for the map you’re lined up on streets and have to navigate that way. Punchy boys can slam baddies down the lanes while the aerial/shooty boys can aim at them during the process. Some punchy boys can stun robots and the support bots can deploy EMP’s to shoot down missiles.

You have a total of THIRTEEN characters to choose from during your battles. If you send in one character too much their brains get overloaded and they need to take a backseat. So, there’s some choice and thought you’ll need to put into your roster. Each character has levels and skills for you to invest in as well. It’s simple but fun and helps build up the main visual novel mystery part of the game later. You get rewards for completing missions based on how good your score is, which revolves around making sure nobody gets injured, your defense node stays undamaged, and by limiting the amount of damage done to the city. These rewards are what you can use to unlock Mystery Files, which are descriptions of characters and items you’ll see along the story path.

Remembrance is the visual novel part of the game, where you will spend 90% of your time. The term “visual novel” doesn’t really do the game justice because there are many ways you interact with the world while exploring and playing. It isn’t just a static image. I think it’s more akin to an adventure game like Monkey Island or Policenauts, where instead of there just being “items” for you to collect and use on something you’ll also get thoughts. By pressing a button you can bring up your character’s thoughts and listen to what they know about a specific topic or situation. Sometimes these thoughts can be used to interact with other characters or items in the world, which could then open up a path towards something new. Each of the thirteen characters at some point or another will become gated by events, so you’ll need to witness X event take place first before you can continue. Or you’ll need to beat X Destruction Mission. Each time you play a character you’re met with a spider web of ideas, almost like a thought board you’d use to plan a project, and every time you go back into a character’s story you have a checkpoint and different branching paths you can explore.

Sometimes you’ll need to explore one path to unlock the thought you’ll need to go down another path. While it sounds like this would make the story fractured, it doesn’t. No matter what path you go down the story unfolds the same way. Technically you’re supposed to see every path for each character because all the stories from the different routes are canon. Okay, maybe it’s kinda confusing. Every character’s story is told at different times along the timeline of the big overarching narrative. So, for example, if you see Juro Kurabe while playing as Iori Fuyusaka, then you’ve seen the opposite of that when you played as Juro. This makes following the narrative insanely engaging and fun. You’ll see a plot reveal in one storyline then go play a different storyline watching the events you saw prior unfold. The story directly references so many pieces of popular media from Japan and the United States, it’s not afraid to wear its influences on its sleeve — but that’s intentional. You may roll your eyes as the game is directly referencing “The War of the Worlds” but then be genuinely intrigued at their reasoning to having it even be referenced. There are many extremely popular Sci-Fi and anime IP being alluded to and as references, but it’s all there to allow the player to better wrap their minds around certain things in the story so that later on the game can intentionally twist those ideas and manipulate them into its own amalgam of X, Y and Z.

The Analysis portion is an event archive displayed as a double helix down the left side of the screen. It’s long, winding and filled with gaps. This is where some more fun comes in, I think. Seeing how the events of the game unfold in a chronological order is sometimes baffling and can change the way you see certain characters and huge story segments. You can view each individual character’s solo path down the storyline or you can see everyones together as a whole.

Because of the intricacies of the game, there’s only so much I can say with this review without spoiling it. If you would have told me at the beginning of 2020 that one of the most impressive games I would play this year (so far) would be 13 Sentinels: Aegis Rim, I would have laughed in your face. SideQuesting will be releasing a more spoilery review of the game when it launches on the 22nd that dives into many more of the things that make the experience so intricate and great.  It’s a unique and jaw dropping ride from beginning to end. I found myself with my mouth open more than a handful of times, thoroughly impressed with the twists and turns of the game and its mixture of visual novel and SRPG. It’s definitely heavy on the reading in some aspects, but it’s worth your while if you want to experience a story that goes all over the place and right back.

This review is based on a PS4 code sent to SideQuesting by the publisher. Per the publisher, the review could only reference events of the first five hours of the game.