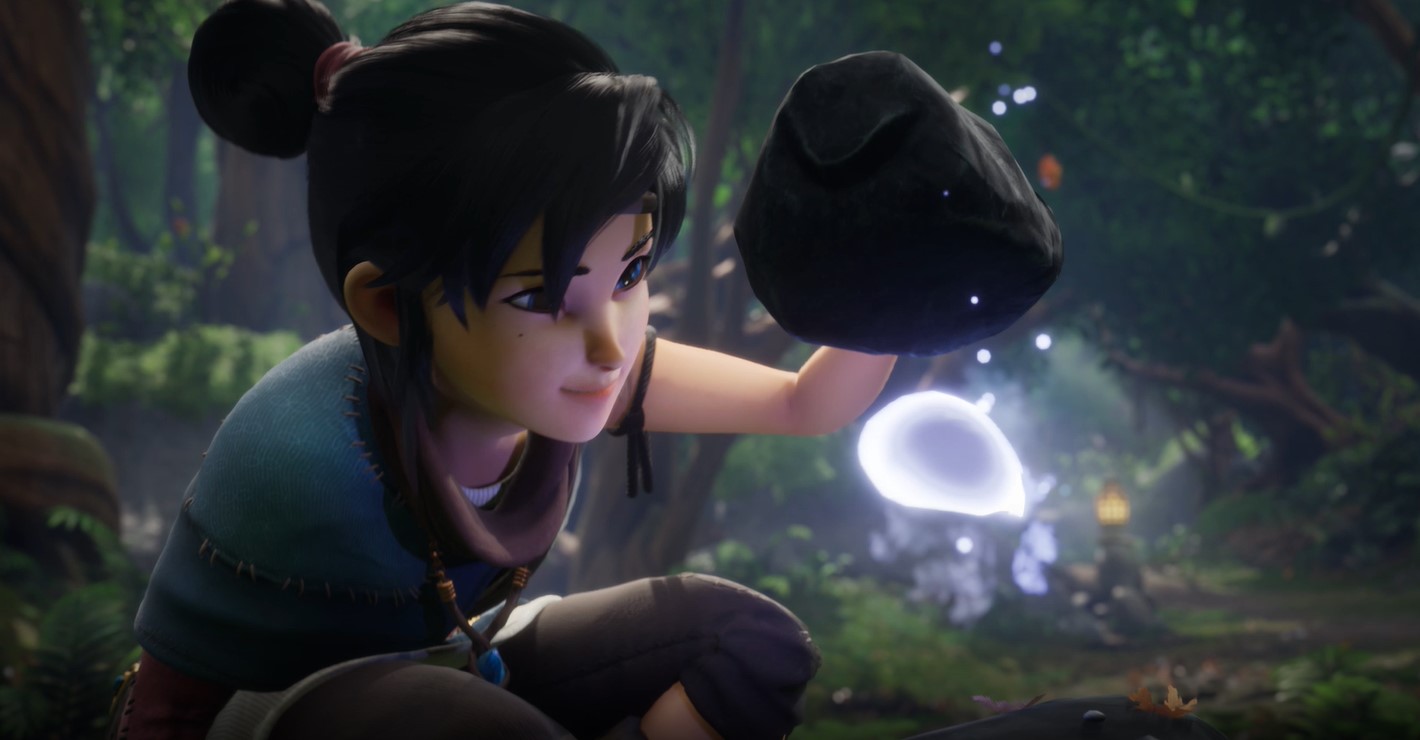 Ember Labs’ notable recent geek cred career possibly began with a stunning fan-made short film based on Majora’s Mask. The overwhelmingly positive response seemed to have spurred them to take further steps into the gaming industry, ultimately resulting in the recent release of their project Kena: Bridge of Spirits. The game is the culmination of that video, maturing the themes of magic, darkness, and a sense of spiritualism that they set out to portray. Kena is almost like a love letter to a love letter, an evolution of an idea that they let breath and have its space, to become its own story.

And, because of that evolution and maturation, it’s become a stunning first project that oozes substance, an engaging narrative, and a genuine love of nature that we can and should synergize with.

Kena’s story begins when she mysteriously emerges from a cave to discover a world covered in poison, with tendrils of darkness and evil creeping around her. There are almost no other people to be seen in the game, and yet the entire experience feels filled with life. Kena is a sort of spirit guide, and her duty is to help the specters of her realm. That connection is much more than just to humans; she’s fully intertwined with the land, intertwining its magic and power with her own. To help her come to terms with her focus, she’s almost immediately tasked with helping two young ghost boys search for their missing brother.

Though she awakens from the cave with minimal abilities, this initial quest serves as a sort of long introduction to the game, slowly but surely adding capabilities to Kena’s arsenal. These can be as small but beneficial as learning how to double-jump (I never realized how much I missed that in modern games), to the utilization of spirit masks. Much like the Majora reference, these mystical masks play a role in the game, granting Kena with special powers that let her interact with her environs in different ways, like spotting secrets in her path. The abilities transform the game into more of a “Metroidvania” than anything else, tempting us to come back to locked areas we may have passed by early on.

The world itself is surprisingly vast, with an incredible amount of detail. It can be easy, and is often encouraged, to run around off of the main paths into deeper woods or waters. The game has a strong sense of traversal accessibility, too, adding an easy fast travel network early on so that Kena can get around quickly without wasting much time. It also does a great job of teaching us how to read the environment and what to expect, so that we never really feel like we don’t know where to guide Kena next. Traversal is meaningful and subtle, with things like ledges not blaringly highlighted for us to grab on to. Instead, they have subtle color shifts that look natural to the game, like an ancient civilization once used color and markings to guide their own path and it’s weathered over time. This attention to detail doesn’t break the “gaming fourth wall” and instead makes everything feel like it genuinely belongs to the world.

More importantly the game’s early quest introduces Kena to the Rot, a sort of forest sprite that permeates the land. Rot are cute, shadow-like little beings that take a liking to Kena. The more Rot that are found (hinted at by a subtle vibration of the DualSense remote) the stronger that Kena gets, and the more access she has to different areas of the map. The Rot aren’t just skill spheres, though. They directly interface with the world. Kena can point her staff and command the Rot to clean up blight, pick up objects to solve puzzles with, or just pose for photos. (Ah, yes, the stunning environments provide a nice backdrop for some great in-game pictures!) It’s easy to fall in love with the little beings. Controlling the Rot is novel, as we still take the reins of Kena to move about, but need to utilize the other stick to have her sort of nudge the Rot to go one way or another. It’s a little unintuitive, but it’s by design, whether optimal or not. The controls are admittedly a little tight, and they take getting used to.

They also become incredibly vital to the combat system, too. Initially Kena can only swing her staff to attack, but eventually learns to harness the power of the earth and its blight to create shields, attack with spells, and utilize new weapons. The game lacks a real combo system, so utilizing the Rot to slow down enemies is key. The battles themselves don’t always have the most consistent pace. Set up as sort of “monster closets” the moment Kena enters a forest clearing she’s attacked by a set of woodland-like demons. Each has a very specific type of weakness, such as launching an arrow or bashing with a shield, but there isn’t a heck of a lot of variety with the standard enemies. Even in higher difficulty levels, these smaller adversaries are relatively easy once the specific power to defeat them is understood.

The real challenge comes from the battles with larger beasts and bosses, which can seem to span the spectrum between passive to painful, most often on the latter end. The developers don’t make it obvious as to how to defeat an enemy. It can take a few tries, and sometimes we only discover how by accident, especially since enough of the game revolves around locking on to things. It’s not impossible to sometimes lock onto the wrong target, but then that also finds new targets that we weren’t expecting, like health restoring plants. The bosses move fast and engage with heavy attacks; though pattern recognition is key, those brutal hits combined with the steady failures when trying to break their defense can be aggravating. This leads to unpredictable difficulty spikes if we’re not prepared.

Bridge of Spirits is an emotional story; it’s pushed into our faces at first, but over the length of the game it fleshes out and pulls on its own strings. It can even feel a little overwhelming at times, which is why I love the little moments where Kena can sit quietly and meditate or enjoy the company of the Rot. It’s a nice breather. These positive vibes are further amplified through the game’s “karma” system. Doing good deeds, like picking up a knocked over statue, or clearing the poison out of a home, rewards Kena with Karma points, which can be used to enhance and strengthen her powers. It further gives a connection to the world.

I was initially turned off by Kena: Bridge of Spirits’ early, almost barebones pace, but as it picks up and we’re introduced to more of what we can do the game opens up, and we are excited to run back to an earlier town or enclave or forest oasis to open a new area. It’s evocative of the early 2000s era of adventure platformers, yet with a wash of great visuals and narrative elements that bring it up to modernity. That ultimately makes it familiar yet its own thing altogether, no thanks in part to the terrific characters and setting. A few design issues aside, Bridge of Spirits is a great experience that begs us to keep going deeper into its forests.

This review is based on a PlayStation code sent to SideQuesting by the publisher. The game was played on a PS5, and is available on PS4 and Epic Games Store for PC.