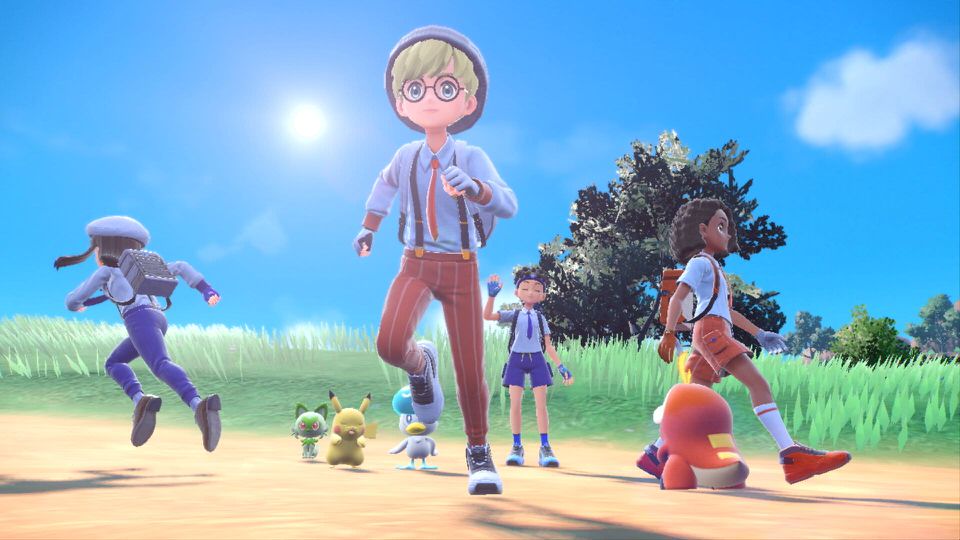 With four trainers at once, too!

The next Pokémon game(s), Scarlet & Violet, will be hitting store shelves on November 18, The Pokémon Company revealed today. Billed as the first open-world game in the series, it expands greatly on the Wild Areas concept from Pokémon Sword & Shield, mixing in some of the concepts the company tested out in Pokémon Legends: Arceus.

The open-world aspect of the game involves a giant, accessible map that allows players to explore it at their leisure instead of the typical story-gated smaller sections of Pokémon games past. That means that players can catch ‘mon, visit areas across the map, and engage in SECRETS without having to wait. I mean, obviously you’ll have to have a good Pokéteam built up to do all of that, but you can ALSO do it with three friends as the game will for the first time allow four player multiplayer. Friends can trade and battle, yes, but they can also explore and catch and do all of the stuff that we’ve always kind of wanted to do in the series. It’s a very lite take on an MMO, but may be perfect for the social aspect of the series.

“Pokémon Scarlet and Pokémon Violet allow multiplayer gameplay with up to four players.​ Along with series staples, such as trading and battling Pokémon, you will be able to explore the various locations of the region in these games with other players. You can discover new Pokémon and explore unfamiliar areas with your friends and family, opening the door to an adventure more precious and fun than ever!“

Alongside the more open nature of the game will come new Professors, Sada and Turo, and a new rival, Nemona. But the star of the trailer is OBVIOUSLY the new Pokémon, Lechonk. Yes, le-CHONK. A swine based creature, it may look plump but it’s all muscle — just like me (I keep telling myself, anyways). The new Legendaries are revealed as Koraidon and Miraidon, some decidedly tech-based creatures that incorporate motorcycle and jet engine aspects to their design.

There’s definitely a futuristic/advanced link to be found in the trailer above, and perhaps the game will have more of that as a part of the overall story.