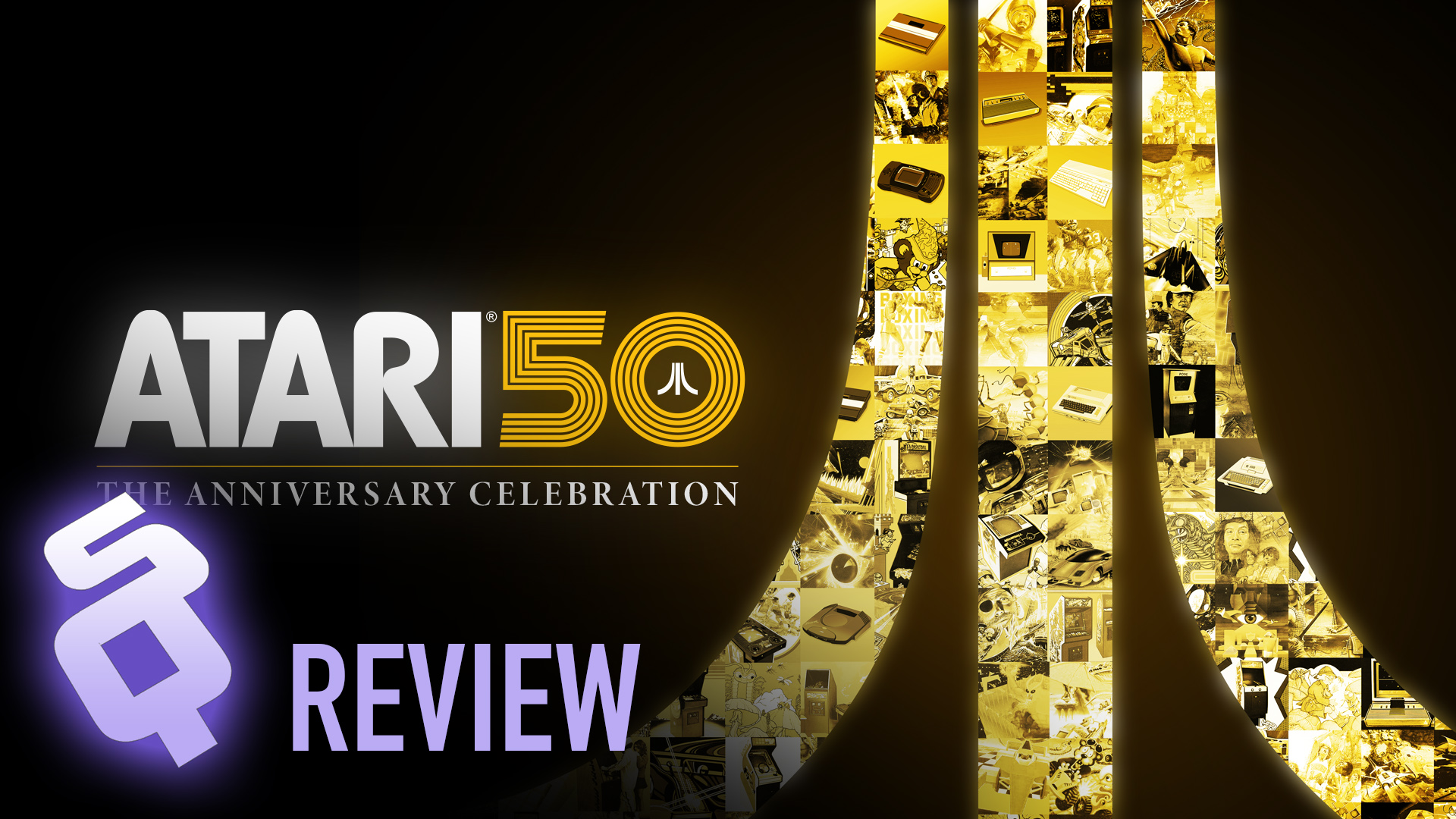 Recently I had the privilege to review a game released to celebrate the 50th anniversary of Atari called Atari Mania and it was a sluggish mess of a collection of confusing and messy tributes the the library of arcade hits wrapped in a fairly charming museum setting. It felt like an all around poor tribute to one of the most important, for better or for worse, gaming studios in the history of the industry.

HOWEVER, we aren’t done with Atari. No sir. The 50th year of this company isn’t over yet. Not everything is speaker hats, NFTs, consoles that nobody owns, or hotels that may or may not ever exist. No sir. Enter video game hero Digital Eclipse with something to prove to the world. Digital Eclipse has provided us with some of the best compilation packages around whether it be Street Fighter, 90’s Disney, SNK, or the most recent TMNT Cowabunga Collection, they always nail it and if I’m going to be completely honest with you I have to say that what they have done with this Atari collection might be the best historical collection of games ever produced.

Atari has the distinction of being around so long and so varied in what they did that a standard “put a bunch of games in on package” hasn’t really worked in the recent years of gaming. In a world of remasters and collections of deep dives into the back catalog of a specific IP with historical documents and soundtracks, the Atari Flashback approach of just dumping a bunch of ROMs into a menu and letting me play them isn’t really going to cut it. Especially when the focus is on the 2600 and their games. I love old games, that much is obvious. But 2600 games simply aren’t fun to play in 20xx.

Enter Atari 50, a collection of over ONE HUNDRED games spanning the history and present day of Atari.  You typically don’t see a collection as thorough as this. The closest I think of is Rare Replay, and even then there were so many notable exclusions from the history but it’s understandable. What you get in this package is an absolutely incredible cross section of the company’s entire run as a hardware manufacturer and in some really surprising ways too. Included in this set are 25 classic arcade games, 40 2600 games, 5 5200 games, 7 7800 games, 6 Atari Lynx games, NINE(!) Jaguar games, 4 Atari 800 PC games, 7 brand new games that are reimaginings or follow-ups, and even an adaptation of a Simon-esque handheld game. Even the Jaguar games had thought put into them by mapping the number pad to the right analog stick. Nobody has put this much love into a Jaguar game that’s not Tempest 2000. It’s absolutely stunning how much ground they covered and the games are only a part of what makes this entire set so remarkable.

Atari is a fascinating story of a company. So much uncharted territory was charted by them and so much was learned from their incredible successes and their explosive failures. And this release sets out to cover all of it from start to finish. The main menu is broken down into 4 different eras of Atari History, when you pick one you are greeted with an interactive timeline. This timeline houses countless photos, quotes, videos, and games traveling down the chronological history of the company. It’s an absolutely fascinating way to handle this and every single video is fascinating and informative. They don’t shy away from the less pretty side of history. An interesting note is that all the videos talk with key developers throughout the years (CliffyB and Tim Shafer appear at various points too, and unfortunately Earnest Cline is also here) but Nolan Bushnell doesn’t appear in any of the videos until the very last video on the timeline, which is a sit down interview between him and the current CEO of Atari, Wade Rosen. It’s refreshing to shy away from the same old things we’ve heard from Nolan year after year and really focus on the people that really made the company hum. The videos cover subjects like the infamous “Too Many Quarters” Pong cabinets, the Crash, their PC era, learning what a console lifespan was, and even a video titled “Did They Do Drugs at Atari?” Overall there is about an hour worth of footage and it’s all great. If you don’t want to go through all of this, you can just push a face button and it takes you right to the games only, however you are incentivized to check out all of the supplemental material by having a completion number. There are also unlockable games by completing certain criteria, including looking at everything on the timeline.

I’m not going to go into all of the games. There are over a hundred of them. I can’t in good conscience talk about all of them even though I could. They are all emulated good, they all play as intended and have all the options you’d expect from something like this. All the games are presented as they would be on their home platform. Arcade operator options, different 2600 options. All that is here and works great and even the scanlines filter is one of the better ones I’ve seen. What I think I’ll do instead is tell you which games I think you should check out from each era, since there are so many and you might overlook something.

Arcade:  Maze Invaders is included in this set and it’s a ridiculous Pac-Man clone that’s also a shooter and created by Ed Logg of Centipede fame and was never fully released.  It tested poorly and never went into production so this is a nice treat

2600:  VERY few of these games hold up or are even playable but one of my all time favorite 2600 games is represented here and that’s Haunted House.  It’s really amazing what they were able to do with so little and made a kinda spooky little game that is well worth checking out if you are a fan of the horror game genre to get a little glimpse at where it all started.

5200: Star Raiders is probably the most interesting of the lot here even though it does contain a never before released version of Millipede, Star Raiders is just a unique sci-fi adventure that’s basically an FPS in its heart.  Really fascinating what they pulled off with this game on this hardware.

7800: The pickings, they are slim on the 7800 but you can never go wrong by Ninja Golf.  It lives up to its name.  I don’t know what to tell you.  You golf and beat up bad guys on your way to your ball.  It’s pretty much perfect.

800/ST:  Again, not a lot to go with here but Yoomp! is a really great addition to this set because it’s a 2007 indie game made for and on Atari 800 hardware and is a three dimensional tunnel jumping game that is honestly just fun to get lost in.  It’s not reinventing any wheels, but it doesn’t need to.

Lynx: Absolutely none of the best Lynx games are represented here on this set but they tried. I mean, Malibu Bikini Volleyball and Scrapyard Dog are fine.  I absolutely don’t remember Turbo Sub and it’s actually a pretty cool game visually even if the gameplay is less than impressive.  Everything here feels like it’s here because it has to be for Lynx representation.  Missile Command is the best of this lot, but it’s Missile Command.  You have several better ways to play this on this set alone.

Jaguar: I know what you’re thinking. Tempest 2000.  And you’re right.  It’s the best game here, but have you tried Trevor McFur?  It’s insane.  You have to play this thing.  It’s a side scrolling shooter that thought that the furry element was the most important part of Star Fox and that’s only PARTIALLY true.  It also has absolutely no soundtrack at all.  This is a game released in 1993 and you play it in dead silence save for gunfire and explosions.  It’s almost haunting.

I’m gonna wrap things up here.  I don’t need to touch on the new titles too much.  They are all clever and cute ways to pay homage to the history of the company while also getting a glimpse of what could have been.  Atari right now is a strange company with their fingers in a lot of pies and no real clear vision of where they are going.  But their history can’t be rewritten.  They have been around for 50 years and for better or worse have helped mold what we have today in the gaming world.  This collection truly celebrates the many successes of the company and in a rare change of pace also celebrates the failures and is happy to do so.  It’s a collection that sets out to be a hopeful and joyful museum filled with stories and tales told from the men that were there from the beginning. This package is so well curated and tied together that it’s able to something previously thought impossible.  It makes the Jaguar relevant.

This review is based on a Steam code sent to SideQuesting by the publisher. Images courtesy Atari.