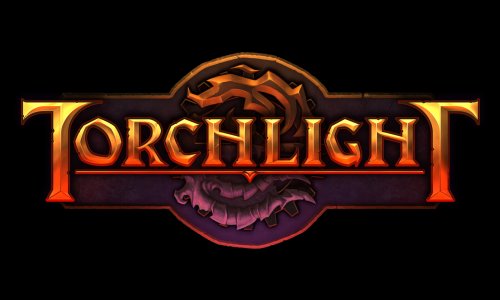 The release of Torchlight on Xbox Live Arcade has been a while in the making, but Runic Games has definitely delivered a console reincarnation of their Diablo inspired hit. I know it sounds like I’m already gushing over this 1200 MSP game, but I’m just trying to let Diablo fans know they can stop reading now. Go play the game, come back, and revel in the loot-whore game that is Torchlight.

Now that my Diablo brethren have returned, lets dig into this PC game convert. Fans of the computer-based game may wonder whether or not to purchase this game.  And the answer is simple: if you like the game and want more content, but hated feeling removed from your Xbox friends, then this game is a must buy. Let me approach the rest of this review from the perspective of gamers that haven’t played the PC version of the game.

Runic not only added more content to the game, but they’ve also managed to remap the controls from the classic keyboard and mouse controls to an Xbox controller without making the player feel like they are playing the game with a hand behind their back. Sets of four spells or abilities can be assigned to hotkeys, and you can scroll through spell sets, giving players the ability to access all of their abilities with ease. 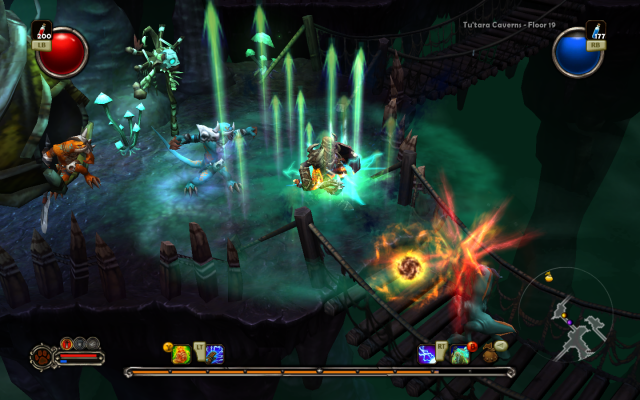 The main draw of Torchlight is the random loot drops of the monsters. Much like Diablo, monsters can drop normal, rare, set and unique items. The rare items are randomly assigned values based on the strength of their base items. These items, along with the sets and unique, are a part of the dirty cycle of clearing a dungeon, examining your loots, equipping and selling the trash.

In the beginning, players are presented with the opportunity to play as a Destroyer, a warrior-type; a Vanquisher, an assassin-style; or an Alchemist, a mage-inspired character. 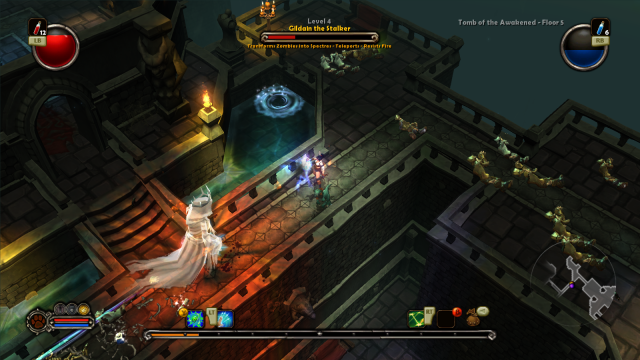 One of the nice pieces of innovation that the team at Runic has done to the Diablo formula is the inclusion of a pet that not only assists you in battle, but is also able to carry your excess loot to town and sell it for you. The ability for your pet to return to town to clear out your inventory without you, keeps the dungeon dwelling uninterrupted .

While the graphics in the game have never been cutting edge, the top-down view feels like a well-deserved update to the dungeon crawler genre. The Xbox version sails along fine through most of the game, but the frame rate takes a hit periodically. The game suffers from the same types of slowdowns that Diablo fans are use to when fighting any of the bosses. Any time a large group of monsters or a lot of spell effects are being cast the frame rate takes a hit. 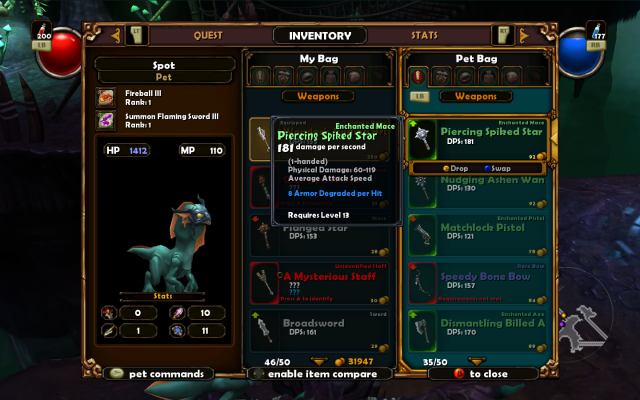 The randomly-generated dungeons make Torchlight very replayable, following the completion of the main quest line. Another interesting twist after completing the main story line is the option to continue to retire your character and pass down an item, which the game will enhance, to your character’s next descendant.

The only thing missing from the original games is the monotonous sound of the clicking of the right mouse button as you traverse your way through the depths of the Torchlight. The only knock against this game is that it is still single player. Hopefully, Torchlight 2 will make its way to XBLA much sooner than its predecessor.