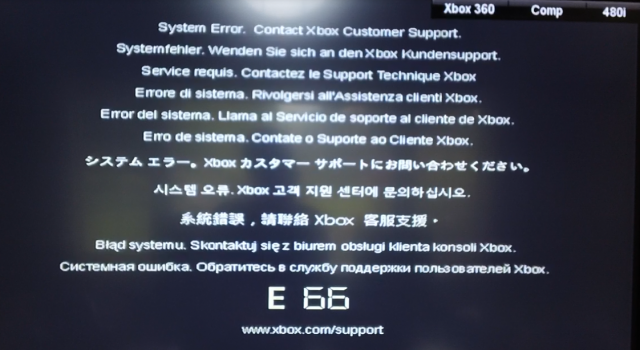 [UPDATE] I was contacted by Stephen Toulouse (@stepto), Xbox Live Director of Policy and Enforcement, who said “@alexrubens you were given incorrect information. I’m looking into it now. We do not disable consoles. Just ban them from Live.”. Interesting. I will update as more information comes in.

[UPDATE 2] Stephen has commented below clarifying that ” We do not disable consoles. We only ban them from LIVE. I suspect the support people were reading from some outdated or incorrect documentation.” “But to be clear, we DO NOT disable consoles. Whatever information the support people had was totally incorrect and I will take care of that separately.”. He has offered to look into my case, hopefully this can be resolved.

[Update 3] Below is a video of Alex trying to update his console and subsequently being hit with the E66 error (ed. note: Third and fourth updates written by Eric Smith):

[Update 4] Several people that have unmodded consoles have contacted SideQuesting reporting the same problem as Alex. Also, an Xbox 360 owner that has admitted to modding his console claims that he has not been banned. More details forthcoming.

[UPDATE 5] According to users in this thread on GameTrailers.com, the picture is photoshopped and the “Xbox 360, Comp, 480i” box in the corner of the screen means that my console is modified. This is due to the TV trying to find the input when the console went into error mode. There are even more posts on this topic on Xbox.com with other users having the same issue. When they attempt to contact Xbox Support, they are treated with the same attitude. Users with consoles that have been modified are reportedly not having issues according to @LOKIOLR on twitter, ” You want to hear the ironic part. I have a modded console that updated just fine with the last live update. Not banned either.” followed by “oh, and their added security has already been defeated. All in all, quite a successful update Microsoft.”.

[UPDATE 6] I went to Microsoft today and handed my Xbox over to Stephen Toulouse so that he can investigate the problem.

[UPDATE 7] According to the comments and message boards that I have been looking around on, the speculation is that the firmware is not compatible with Samsung DVD drives. No official word on this though.

[UPDATE 8] I just got off the phone with someone at MS who is investigating my console. The console was tampered with and they are looking into how. Before you say, “A HA! I knew he tampered with it!”. The things that he described, I have nowhere near the capabilities to do. He said that while there are people who do that intentionally, some people get caught up in it unintentionally. Besides the case intrusions, there was signs of the ODD (Optical Disk Drive) being moved and installed with a custom firmware. I’m not saying that this is the case. This is a scenario that happens though, as in, someone mods their Xbox, returns it, and it gets put back out on the shelf. This is always a possibility.

NOTE: Before I continue to just update this post with new facts, please think about this, before you say “Oh, he is modded and is just mad that he got caught.” Think about it, modded consoles are not affected and they have already found a work around for the update system.

On Friday I received my copy of Dirt 3 for Xbox 360 in the mail. When I turned on my Xbox to put the aforementioned game in, a prompt came up, “An update is available from Xbox Live. Please install to connect to Xbox Live.” Thinking that this was normal, I did as it instructed and right near the end of the update, the screen cut out. When it came back I received a system crash error message stating “Error Code: E66 Contact Xbox Support for more information.” I found this vague error message to be very odd. I retried the update process a few more times with the same outcome. I eventually decided that I should do as the message asks and call the Xbox Support line. This is where the madness began.

I called and was greeted by a very helpful person who asked me what my issue was. They were great and very eager to help, going through the steps of where I bought the console and those necessary steps, right up until the point where I mentioned the E66 error code. I was greeted with a sigh, “Sir, this error code is associated with modified consoles. This is happening because you modified your console and are trying to connect to Xbox Live, which violates the terms of service.” This was an outright surprise to me as I have never modified my console. I asked him to elaborate on what he meant by modifying my console. “According to our policies, we cannot disclose how exactly it has been modified. Just know that we have a system in place that does multiple checks and that is how we KNOW that your console has a software modification.” Despite my numerous attempts at trying to get them to clarify what that meant and how it was possible that my console was associated with that, The only response that I could get was, “There isn’t a debate here. This doesn’t happen by accident. It happens when the system determines that you have been using these modifications.” He went on to share that they sent out this update to those that they suspected and the update was a security check. Without this check, your console is permanently banned.

I asked them if there was any other way for them to check. I was asked for the “x-code” in my system information and was told that they would use that to look it up. After waiting on hold for 20 minutes, the representative returned and said, “Yeah, your console is banned for software modification, and there is nothing that we can do after you modify it.” I told him that I was 110 percent positive that my console had not been modified in any way. His snarky response was, “Well, if you are so confident, pay $100, send your modified console in to our repair center; we will prove that it has been modified and send it back to you in without repair”. There was no doubt in their mind that I had modified my console and nothing I could say would change that.

While I attempted numerous times to speak to a supervisor, I was assured that they would tell me the exact same thing and that it wouldn’t make a difference. I demanded to speak to one as this was an outrageous claim. I was put on hold and after 30 minutes of waiting, I was told that there were no supervisors for me and that they don’t have a schedule for that kind of thing, but I would be getting a call back anytime within the next 24 to 48 hours. WHAT?!

At this point, I just wanted to understand why the software would flag my unmodified console. I asked the representative to clarify what “system” they were using to determine this. Just like everything else, I was told that they “cannot disclose that information”. I suggested that the Policy and Enforcement department might be behind this and he immediately confirmed that fact. I asked for all of his information (name, reference number, etc) so that I could have that information for the callback. I then asked to be transferred to that department’s service line as he assured me that they had one. He asked for my gamertag and then told me that he was transferring me and did so before telling me his name.

I then heard the all too familiar “Please wait” and then a voice said “Hello, this is Xbox Support, how can I help you?” I said, “This isn’t the Policy and Enforcement department is it?” She confirmed this fact and said that they don’t even have a number for that department and that there would have been no way for the previous guy to transfer me there. I asked her to pull up his data that he assured me was in the file; only to find out that his notes were, but not his data. So here I am, back at the start; almost two hours later and even more confused than I was at the start. She told me that I would be best to wait for that callback to happen and we ended the call there. 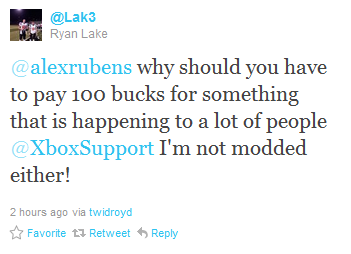 I knew that a console bricker couldn’t be something that had gone unnoticed; this is the Internet after all. I searched for “E66 error update” and found a few shady sites talking about the error, but the last that I had seen was from early 2007. Throughout my entire conversation with Xbox Support on the phone, I had been tweeting the outrageous claims that they had been making. Suddenly, tweets started to come in from people having the same problem. @xKoRnDoggx says, “[I’m] seeing a new trend here. Xbox ugottaproblem. Not just the new slims either.” Followed up by @Lak3, “Why should you have to play 100 bucks for something that is happening to a lot of people @xboxsupport I’m not modded either.” This just goes to show that it isn’t just me and that contrary to what the personnel at Xbox Support say, I am not the only one that this is happening to.

We’ve reached out to Microsoft for comment, but have yet to hear back from them. We will update as the story develops.

What would you do in a situation like this? The fact that this was a targeted effort towards console modifiers that ended up hurting regular consumers without any credit from Microsoft is the worst part of this. Imagine that you are suddenly accused of criminal acts and told that you cannot use your console anymore without any explanation. This is crazy, especially when you have done nothing wrong? Have you heard of anything like this before?