With PAX East just less than a week away, there are PLENTY of things to prepare for. Parties should be at the top of your list!

We’ve compiled a list of all of the parties we know about, from ours (obviously) to the obscure. Get ready… it’s going to be a blast! We’re adding new ones all the time, so keep checking back!

If you’re hosting a party and would like to include your flyer or more info, please contact us at dali [at] sidequesting [dot] com

Come dressed as your favorite Pokemon!

This event happens on Thursday April 5th 2012 at 7:30pm. The Pokecrawl is a barcrawl/scavenger hunt that’s Pokemon themed. The goal is to get as drunk as possible while participating in drinking games designed to get you there. Oh yeah, it’s also a great way to meet fellow PAXers and make friends before the convention itself. As always, attendees will be encouraged to come dressed as characters from the Pokemon universe (1st & 2nd generations).

In Partnership with  IGDA – Boston, MassTLC would like to welcome all exhibitors and game developers to our 3rd annual party to celebrate the local Massachusetts gaming industry and all it has to offer. This networking event will take place the night before PAX East starts, April 5th.

Scott Pilgrim vs The World

A combo ticket for ROCK BAND NIGHT & SCOTT PILGRIM together is $15 gen pub / $13 members & students. Admission to RBN only $7. No passes.

Join us for a night of rock and roll fun with the makers of the fantastic ROCK BAND video game. Form your own band or fly solo and enter for a chance to compete live on stage in front of a panel of special guest judges from the gaming world. 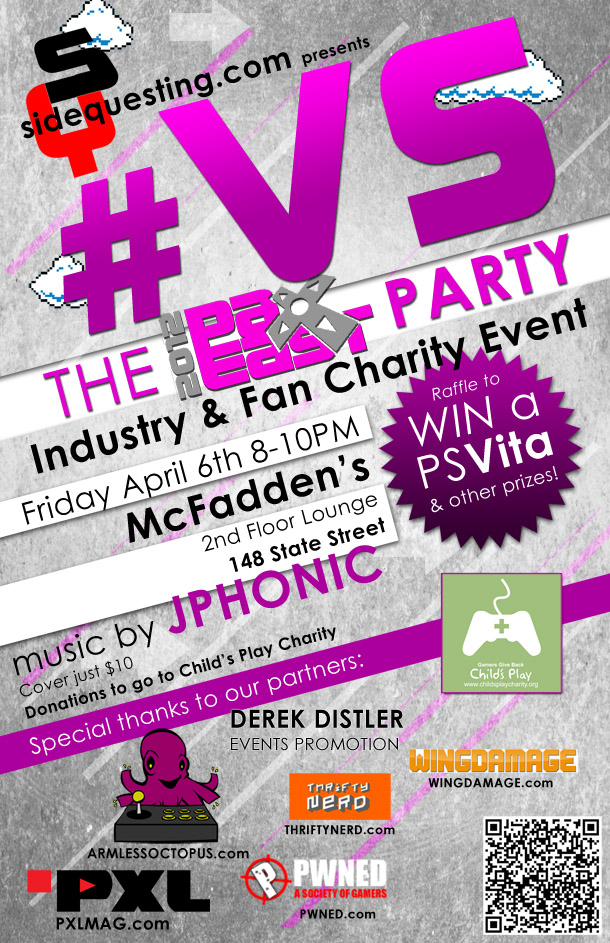 Join us for a night of industry, fans, and friends as we celebrate SideQuesting’s 3rd anniversary and raise funds for charity!

Win some excellent prizes, like a Playstation Vita, tons of video games, and more!

Musical stylings by the incredible JPHONIC

This event is LIMITED, so please bring the flyer with you to gain entry or RSVP via Facebook! (Don’t worry, they’ll be everywhere at PAX)

WHAT: Food. Soft drinks. Rock Band. A preview of Phoenix Online’s awesome upcoming game, Cognition. And, most importantly, the opportunity to meet a whole lot of awesome gamers from Boston and beyond.

WHO: You! Are you gay? Bi? Trans? Queer? Questioning? Asexual? An ally? As long as you’re into games and down with the GLBTQA crowd, you’re more than welcome to attend.

It’s party time! NAMCO BANDAI Games’ ShiftyLook is teaming up with Destructoid for the most bizarre (and delicious) PAX East Party EVER: a chicken and waffles smörgåsbord!

If you came the last two years, we don’t need to tell you it’s the one party you don’t want to miss. Your feedback was loud and clear, and DigitalNoob.com has partnered with Exclusively NEP to bring you the best Gamers Gone Wild yet.

Celebrate 1 year with Wargaming.net, and all of the incredible records that it’s broken!

Things you need to know:

How do you score an invitation?

Curse is throwing a MASSIVE party for our fans and community at PAX East in Boston. The party will feature open bar, appetizers, DJ, arcade, party favors, and green screen photo opportunity.  You won’t want to miss it!

RSVP now for an exclusive pass and instant access. You’ll be ‘on the list’ and get into the party right away.  We’ll be sending out a confirmation email prior to the party with further information.

If you’re 18+, head over to http://www.curse.com/sweeps/pax-rsvp? to take advantage of this exclusive opportunity to secure your place at one of the biggest events at PAX East!

Just a reminder, the party’s 21+ and you can’t get in without either an invite or a badge from AB or PAX East. We’ll be handing out invites at our booth at both conventions if you do need one. Don’t forget to wear your favorite Sanshee merch for a chance to win some prizes.
Facebook Event Page Here
[/box_light]
[box_light]

This year at PAX East we have a special event planned just for our Epic Gamers!  Come dressed as your favorite characters from any of our games or just bring your camera for a chance to spot some of your favorite Epic Games characters.  We’ll also have Mike Capps and Cliff Bleszinski in attendance helping us hand out these awesome new Epic Gamer shirts!

Our amazing friends atTriforce are helping us  host this event at their booth (#1123) on the Expo floor at 5:00 pm onSaturday April 7th.  Check out the PAX East Expo floor map for the location:http://hw1.pa-cdn.com/pax/resources/PAX_East_2012_Expo_Map.pdf

So on Saturday night at 9, I’m going to be at Fritz, and I would appreciate it if at least a few of you guys going to PAX East or living in the Boston area showed up to keep me company! I know it conflicts with the Saturday night concert schedule, but I can promise you that we’re a whole lot more fun than listening to some concert!

Fritz is at 26 Chandler St. in Boston, MA, and is both walking distance from some of the popular hotels and accessible via public transportation. For more information on the bar, you can click here.
[/box_light]
[box_light]

We (XMG Studio) are an independent mobile game development company who are making our first voyage into the gaming sea that is PAX East 2012.

We’re really pumped about meeting as many people as we can and thought it might be best to host a social gathering of sorts. We’ve booked out MJ O’Connor’s (the Park Plaza location near some of the hotels) for Saturday night from 9:30pm to 1:30am.

Swing by our booth (#134) and grab a wrist-band to get in since there’s a limited space. Since we will be showcasing our new Ghostbusters game (currently in development), we will be pushing the party to be Ghostbusters themed.[/box_light]
[box_light]

What it is: An EC community meet-up. Come and meet fellow Extra Credits fans & hang out. Yes, I am asking you to be social, be silly, and have fun. James Portnow of Extra Credits will be there, so don’t miss this chance to say hi.

Where it is: Atlantic Beer Garden. Located at 146 Northern Avenue Boston, MA 02210

Why should you come: To meet up with a diverse group of like-minded game enthusiasts who love Extra Credits and want to move the medium forward!

How to participate: Please RSVP! Visit the site to RSVP.
[/box_light]