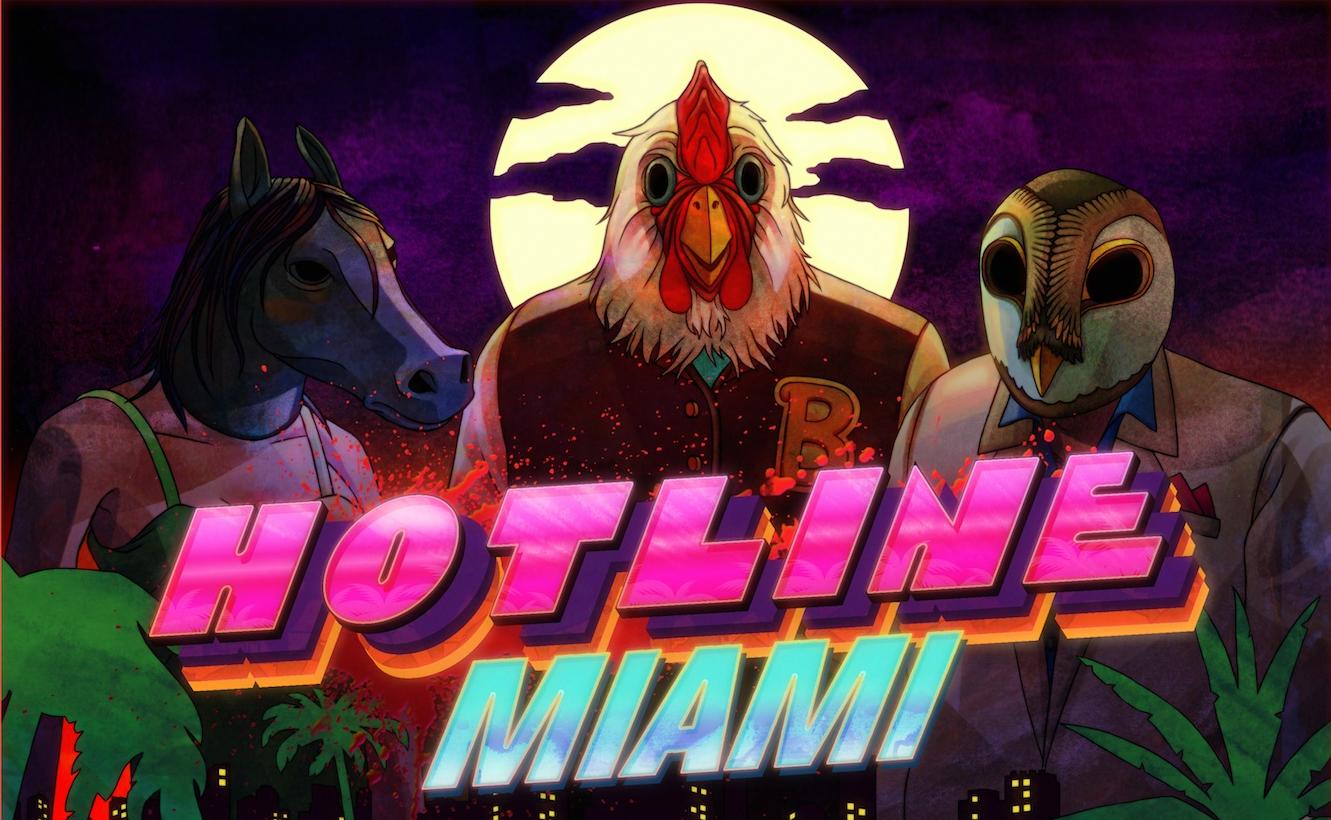 It’s May 23rd, 1989, and the phone is ringing. It’s been buzzing off and on for the past few weeks, always for me and always with a new voice on the other end. Today it’s “Harry” from management; says he’s got a burst water pipe over at some condos along 122nd SE St. He tells me not to go easy on “the mop”, that the whole building will be flooded soon. The line goes dead. I look to the girl I rescued, see the dead look in her eyes as she stares at the TV we found. She won’t miss me while I’m gone.

Time to get to work.

Hotline Miami is a top-down action game. No, that’s not quite right: it’s a top-down shooter. Alright, that’s not right either, as it happens to be a score attack shooter. Ugh, no, no, no! Hotline Miami, at its core, is a series of bloody puzzles, a maze of bullets, splayed intestines and shattered glass. The main character has no name to speak of, nor do any of the hundreds of unfortunate gangsters and punks that are about to meet their swift and horrifying ends at his hands. He moves from weapon to weapon with a split-second grace, throwing golf clubs down hallways in favor of machine guns only to spend fifteen bullets mowing down a new crop of cronies tha-Oh, damn it all, a stray shotgun blast from just outside of his view crumples his body. One shot, one kill.

Pumping rhythms rock their way through every murderous act, an infectious collaboration between artists like M.O.O.N., Jasper Byrne, Scattle and more. This electronica is a driving force just as powerful as the game’s breakneck pace, never refraining and never letting your eardrums rest. As a soundtrack, it shifts from pulsing and vibrant to chill on a dime, evoking the right mood at every opportunity. It also happens to be one of the best examples of using music to keep a player moving forward. The constant thump-thump in the background becomes a natural counterpart to the calamitous sounds of gunfire and crushing skulls.

A number of elements congeal together like a bloody paste to make Hotline Miami feel so right, so insatiably bizarre that you can’t help but sport a maniac’s grin as you twist your way through the impressive murder sprees the phone calls keep sending you on. What makes these elements stick to one another so well – the variety of tools at your disposal, the simple yet precise controls, the single hit-point lives – is how quick everything feels. Every level lasts just a minute or two, but each passing second is filled with constant movement as you go about clearing floor after floor of pasty white thugs, all at the behest of the nameless man on the other end of the phone line. The flow of combat in each level is reminiscent of Super Meat Boy in its constant repetition, a flurry of punches and a spray of machine gun fire interrupted only by my death. One key press later and I’m whizzed back to the start, the process repeating itself.

Death isn’t a punishment in Hotline Miami, but a necessary learning tool. You’ll die from things that get telegraphed to you and others you never saw coming, but each death allows you to adapt, to change your approach in hopes that the next time that bastard with the shotgun around the corner decides to turn, you’ll be waiting for him. He won’t know what hit him, and neither will the scumbag with that useless little knife down the hall. But you will. The thrill of that final kill in each level, the sight of that golf club crashing into a thug’s face over and over again until a bright neon +1000 PTS lights up above you will feel that much more real. You earned that kill, just like the eighteen before it, and there are so many more to come.

You learn early on that, despite its appearance as a top-down shooter, Hotline Miami is much more a thinking game than it is a shootfest. Going in with a “guns blazing” attitude is the surest way to never get past the first few guards. Instead, you plan out an approach to each mission, making new moves and trying new things with each of the untold number of deaths you’ll encounter along the way. You might decide to go for the silent route, knocking down thugs with melee weapons alone. Perhaps you’re feeling saucy and want to light up the night with every gun you can get your hands on. Each option is viable, and the floor becomes littered with weapons you cycle through at a second’s notice.

Stages are designed to be tight and pitch-perfect tracks instead of mindless combat hallways, where new buildings represent new puzzles to piece together, a fresh cavalcade of deadly enemies to analyze and chop down to a bloody stump. After all, you don’t have much room to mess up: one stray hit, one mistimed punch and you’re dead.

The story of this depraved killer is doled out bit by bit, a bizarre and macabre five-part tale that offers more questions than it answers. Someone is making these phone calls, and for some reason our anti-hero keeps answering them with little idea why. As the kills get more grotesque and the stakes get higher, reality and illusion start to bleed together, erratic visions becoming entire scenarios to navigate through. The main character’s mind is clearly one that’s been fried a time or two, to the point where it doesn’t seem like he’s sure who he is anymore. Is there a purpose to this rampage, a reason for the brutal slaughter that he can’t help but continue to engage in? He couldn’t care less. The phone keeps ringing.

All of this would just be horrifying if 1989’s Miami wasn’t portrayed in the all-too-standard pixel-based graphics we’ve come to know in indie games. There’s a bit of a twist here, with sprites that seem a bit more fluid in nature than your standard fare, but it’s the environments that stand out, a vast array of locations hearkening to Vice City and the nightclubs of yore. As a result of this pixelated tone, the ultra violence seems comical in nature, grotesque displays so far removed from the realm of reality you can’t do much but just grin at them. Sure, there are tons of games that ask you to kill an astonishing number of other people, but none take an unobtrusive and over-the-top stance to the way you approach murder quite like Hotline Miami. Heads explode, eyes get gouged out, intestines fall open across blood-soaked carpets, but the question of morality won’t come up during your missions. It’s a murder simulator where you kill an astonishing amount of other murderers, rendering all sense of empathy moot.

Hotline Miami throws hundreds of enemies and precise controls into a blender and doesn’t hesitate for a second to hit the frappe button. Beyond that, it’s a game that has no doubts about the fact that it is a game, puzzles within puzzles where not a single one cares if you ever complete it. Color-drenched backgrounds and pulsating soundtrack combine with frenetic and twitch-laden combat to make something unique, a pile of corpses that feels so impossibly elating to rise above. Of all the games coming out during this drenched holiday season, you’ll be doing yourself a disservice if you pass up Hotline Miami.

It is, in a word, brilliant.