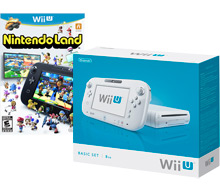 One of the hotter game items this season has been the Wii U Deluxe set. The set has easily been the more popular of the two SKUs that Nintendo has dropped off at retailers, coming packaged with the extras of Nintendoland, a charging cradle, a Gamepad stand, 32GB of storage and the Deluxe Digital Promotion.

Though it’s been difficult to find, Best Buy is helping fill at least some of that void by selling the Basic Set with the addition of Nintendoland thrown in for the low, low price of $299.99. The promotion runs until December 29th as far as we can tell, so get to using those gift cards you JUST GOT FROM CHRISTMAS.