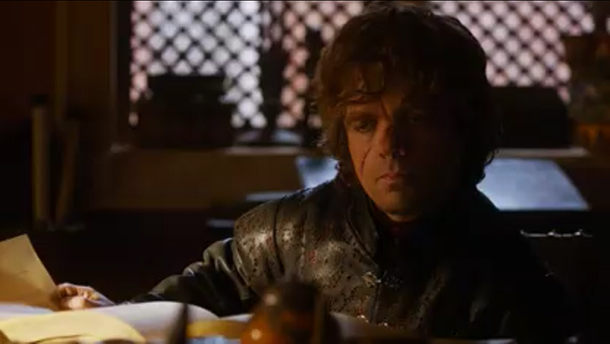 [Spoilers throughout. Do not pass GO, do not collect $200 if you haven’t watched the episode.]

It’s tough to be a Lannister these days. The one house that has held steadfast amidst the collapsing kingdom is now feeling the full brunt of the situation they’ve put themselves in. “A Lannister always pays his debts” is a common motto of the House of Casterly Rock. However, the debts that individuals of the family have eclipsed are now potentially beyond payment.

At least, not with coin.

“Walk of Punishment”, the third episode of the third season of HBO’s Game of Thrones, marks the beginning of a pivotal turning point for the fates of several characters and factions within Westeros. In fact, the theme of the episode can best be described as one of characters’ looking inward, potentially to redefine themselves, along said “walks”. Many of the things we knew about the characters, almost stereotyping them, begin to turn here. The Starks (and by virtue of association Tullys) are no longer as sure-footed. The Lannisters aren’t untouchable. The Greyjoys aren’t made of iron.

The episode brilliantly bookended this concept with the Brienne/Jaime relationship. We’ve come to know Ser Jaime as a pompous knight, a king slayer, serving justice in name only. While defeated and captive and on his way to becoming a pawn in a trade, he’s been stripped of his gallant demeanor and his cloak. The new layer of being captured while already a captive, however, seems to break his id. He knows what Locke’s men will do to Brienne once they’ve taken her back to their camp. He knows because he’s either done the same or let it happen around him to keep his own men under control. It implies that he’s starting to take some level of respect for her. In her he sees the earlier version of himself, after all: a mindless, heartless robotic soldier hell-bent to serve. The most telling moment comes when Brienne is taken away to be raped. The wheels begin to turn in Jaime’s conscience; once a knight, sworn to protect, he’s let his power take the better of him.

For the first time we see Jaime feel guilt. Here is a man who once pushed an innocent child off of a ledge now protecting his captor from certain vile things. His redemption begins here, it seems. His demons — being known as the Kingslayer, a once decorated knight who is now hated by thousands, has more than likely eaten away at him throughout his recent captivity — are his battle now, not the men of the North. Except for, you know, the men that currently hold him captive.

The final scene of the episode depicts Jaime’s “walk of punishment” for his past sins, as he is led to a table and his sword hand chopped off, much to his surprise. His manhood is now gone. His career is over. The fall from grace was epic, and his new story begins now.

The fall of the Lannisters continues throughout the kingdom. In a brilliant scene of musical chairs (and a very literal game of thrones) which saw the small council fighting for proximity to Tywin at the strategy table, Tyrion bucks the trend and opts to sit at the end, as far away from his father as possible. Peter “Little Finger” Baelish rushes past them all to sit next to the Hand with a flair of conniving that only he can deliver. His power play within the crumbling kingdom begins, as he’s calculatedly forced himself into a position of lordship (of Harrenhell, no doubt) by planning to marry Lysa Arryn and bringing the Vale under the command of the lions. It’s all clearly a ploy to benefit himself, letting us (the viewers) feel as if he has much more planned for his new position than the Small Council thinks. His cunning is further exemplified by the discovery that he’s been funding the war by borrowing money from the Lannisters themselves. How do you fund a war with money you don’t have or intend to repay? It doesn’t matter on the way up.

The Starks face a similar issue, but one more focused on lack of support rather than funds. With deserters beginning to mount up, lack of faith is growing in Robb’s ability to win an entire war. We’re introduced to Edmure Tully, Catlyn Stark’s brother and heir to Riverrun, as he tries and fails to launch fire arrows at their father’s burial boat on the river. The faces in the crowd shift from slight humor to genuine concern during each attempt at something that seems to be ingrained in Tully tradition. It’s not until Brynden the Blackfish, their uncle and father’s brother, grabs the bow and perfectly launches an arrow onto the boat that we see the growing tension. Later, he’s chastised by an extremely angry Robb for failing to obey orders on the battlefield. Robb has been upset in the past, but now he’s being let down by his own family.

The episode was littered with little situations that show us how fragile the world is becoming and how characters are changing.

Across the world in Astapor, we see Daenerys take on a more forceful stance than she has in the past by announcing her intent to purchase the Unsullied. Slaves, mind you. Something she never would have considered previously. And even while she says that she’s trading one of her dragons for the army, we know better. Something is up her sleeve. This isn’t the shy, timid Daenerys of the past, or even the doubtful woman of the present. This Queen is new and purposeful and willing to push back. This Queen is pure Targaryen. She seems to have finally shed the Dothraki chains and consumed the reality of the world around her.

Sam Tarly is another character beginning to shift. Once just the butt of jokes and lacking self-value, Sam has developed a bit of courage. We all became Sam when he witnesses Gilly give birth to a baby boy; our hearts sink because we know what happens next, but now we feel a sense of duty to prevent it.

Melisandre leaves Dragonstone on a mission to find out what to do next. She’s still following Stannis, but there seem to be some rifts forming. Arya’s run-in with the Hound shows how little life means to the warrior. When she asks him if he remembers the Inn, the one where the Hound killed her friend after he caused Joffrey slight fake-dueling embarrassment way back in season 1, he replies with a “no.” Death is nothing to Clegane, even though he did offer to help Sansa escape from King’s Landing in the past. Death is just “work” to him.

But it’s the hand-chop that really puts the exclamation point on this episode. It’s the realization that everything can be lost instantly that makes the series so good, and here that theme is furthered. When we see it take place, we’re shocked and left wondering if neither the Lannisters nor the Starks really have control any more. Pro tip: they don’t. And neither do Stannis or the Night’s Watch, the Greyjoys or the Wildlings. No one seems to have it, save for bit players in the Tyrell and Baelish camps. And we love that.

Uncertainty in Westeros is a good thing for TV. And this episode was a great one to leave us salivating for what happens next.