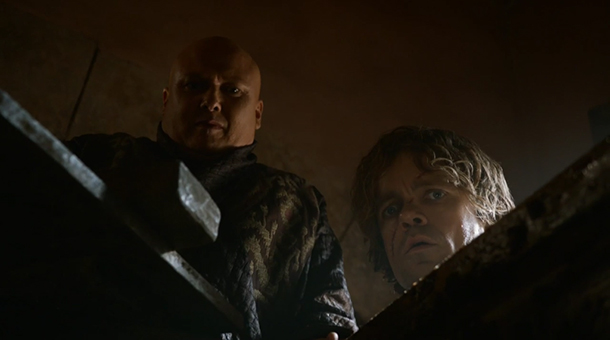 [Spoilers throughout. Do not pass GO, do not collect $200 if you haven’t watched the episode.]

Choices. Choices can be an incredibly weighty thing. Often our choices lead to prosperity or failure, but we are made by them and live by them.

If last week’s episode of Game of Thrones was the beginning of a turning point for many characters, this week dealt with the choices that they need to make first and the consequences that follow. Within the episode we see some choices that lead to great things, some that lead to horrible things, and most leading to character redefinition.

It made for an entertaining ride from the start, and one that led to the best episode of the season thus far.

Choice is a big part of what moves characters forward in a form of entertainment. When employed correctly, it allows the plot to spin and twist without inhibiting the characters’ evolution. In “And Now His Watch Is Ended” big choices were either discussed or took place in every scene, from beginning to end. This week it was tough not to cheer a couple of times, or at least let out a little “finally” under my breath. It seemed like everything I wanted to happen, did.

I’ve been a fan of Brienne, the “almost knight” tasked to transport Jamie Lannister to King’s Landing. Similarly, I’ve hated Jamie — well, up until now. Brienne thanks Jamie for rescuing her from rape, and reminds him that “You cannot die. You need to live to take revenge.” Jamie is turning. He’s never had hardship like he does now, losing the hand that held his sword and essentially himself in the process. His choice was to save Brienne, to begin to accept that change, and to understand what it will mean to not only survive but to fulfill his duty as an actual knight.

I’m really enjoying seeing Jamie become more than the selfish “typical Lannister” he has been. He seems to be developing honor in a way that he’s never been able to before. He’s far from being there, but he’s on his way…. I hope.

As much as I hate Joffrey, that much I love Margaery Tyrell and her family. The Tyrell clan is quickly becoming my favorite house, with each member well versed in “playing the game of thrones”. Margaery wants to be “The Queen”, and knows how to play a completely infatuated Joffrey into making him do things he doesn’t realize is chipping away at him. Joffrey’s choices are gone. He has none. Margaery is playing him like a puppet and it’s working — and boy is it fantastic to watch. The little punk is getting his due.

Cersei see this happening, too, and reaches out to her father Tywin for help. I loved Tywin’s reply to her observance of the Tyrell’s manipulating Joff: “I wish YOU knew how to manipulate him.” Goodness that was awesome. Cersei let Joffrey make decisions instead of her as Queen Regent, and the Lannister house is being broken apart from the inside. Though, I can see some viewers beginning to resent the Tyrell advances; they’re “out-Lannistering” the Lannisters and manipulating those around them for personal house gain. The citizens in disarray? Margaery visits the poverty stricken Fleabottom and wins them over. Sansa in trouble? The Queen of Thorns arranges for her to marry her grandson Ser Loras, the Knight of Flowers. But I welcome their version of kingdom control over what Cersei brought to the table.

Not all choices led to positive outcomes, either. Theon, supposedly being helped to escape by one of Yara’s supporters, spills his guts about the atrocities he committed to win the favor of his father. “I made a choice…. and I chose wrong,” he says of leaving the Stark cause behind. He’s defeated in more ways than one, as his rescuer reveals himself to have been actually working for his captors, sending him back to the flayed cross. I’m kind of glad to see Theon crawl back to the light, but I want to see him squirm as he gets there.

Daenerys made the big choice this week to give up her dragon for the army of Unsullied… or so we thought. The Targaryen princess pulled the ultimate deception on the slavers, having understood the Valyrian tongue the entire time. Upon gaining control of the Unsullied army she turns them loose on the slavers and calls to her dealt dragon to burn Kraznys Mo Nakloz to death. And man did that dragonfire look great.

Daenerys made essentially a career-defining choice in attaining the Unsullied and burning the slavers. The Targaryen in her finally made its way to the surface as she dominated the city, leaving it with the charred remains of those who oppose her. She’s become the bad ass Queen of Dragons that I’ve been looking forward to seeing since she first came across the eggs in Season 1. This is what I think we’ve all been waiting for. She has her army… bring it, Westeros!

And there were many more examples of important choices throughout the episode, far too many to continue blabbing about.

So there’s choice. It caused all kinds of madness and mayhem to happen in easily my favorite episode since late last year. It’s the most important episode as well, narratively and from the development of the plot, that has taken place since “Blackwater”. The cinematography of this season has been good up to this point, but this week there was a certain epic air to it. Overhead shots of soldiers showed massive scale, candles lit secret meetings, and we were even transported inside crates, all given an exclamation point with the first-person view of dragonfire raining down on us in the end. I am completely salivating for next week in all respects.

I know it’s an overused phrase, but I think it works well here: Shit just got real. And holy crap, am I ready for more of it to hit the fan.