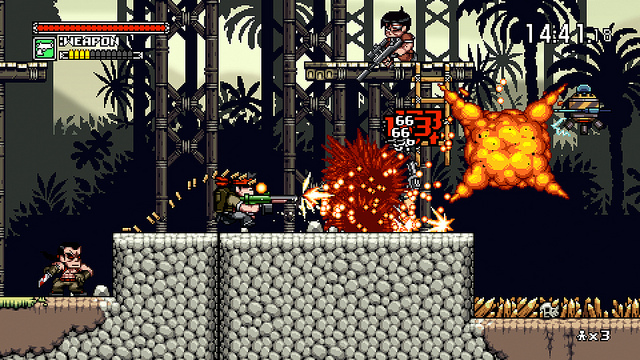 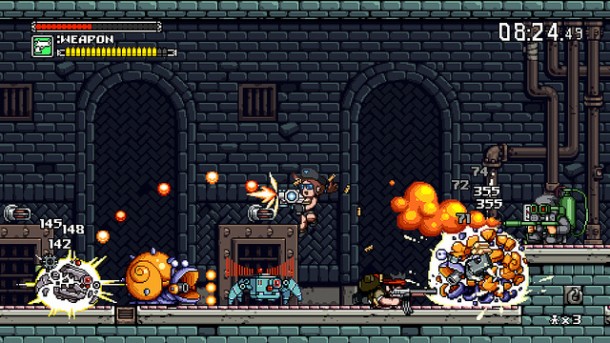 Pixel art has become a sort of mainstay amongst independently developed games. It’ll always look good, and it allows creators to more easily tile together worlds and characters to speed up development. And though we played the latest pixel-inspired game by Tribute Games, Mercenary Kings, on a Playstation 4 at E3 this week, there wasn’t anything that really screamed “next-gen” to us about its visuals. It’s a 2D platformer that really could end up on any device, and launching on a new console doesn’t mean that it’s custom-designed specifically for the new Sony world.

But that’s okay: Mercenary Kings is hella fun and that’s all that matters.

Tribute’s 2D platformer is baked-in nostalgia, utilizing large beautiful sprites and sounds, some light physics, simple button controls, and terrific character and enemy design. Up to four players can band together and play for split-screen mayhem. The most unique and perhaps”next-gen” feature about Kings is its crafting system, which involves around 300 parts that can be grafted onto existing weapons as upgrade, or used to create new ones. 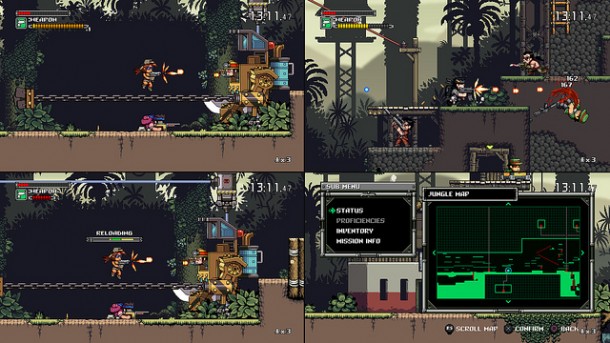 The game is divided into missions predicated on objectives like clearing areas of enemies or rescuing captives. Each hostage in the game is designed around a specific tier of backers of the game’s recent Kickstarter effort. Our demo mission required us to visit enemy barracks and rescue four hostages under a five-minute time limit. Once we selected our characters and weapons, we were off and running. We could duck behind blockades, shoot enemies, and sneak up and knife them through certain obstacles. Though the layouts are in 2D, the world allows for moving in and out of buildings for further searching. Everything fit the classic 16-bit vibe, but with big, bold visuals designed by Paul Robertson of Scott Pilgrim vs. The World fame.

Within seconds of starting, bullets were everywhere, athough there never seemed to be more than a couple of enemies on the screen at once. I accidentally shot one of the hostages being used as a human shield, but managed to polish off the bandit that grabbed her with a few well-timed shots. That’s one of the things I liked most about the game: it’s more more than just run and gun; there are slight tactics that must be employed depending on how enemies react to the player or the environmental obstacles.

Time wound down, and our demo ended after finding only two of the captives. The game is easier with co-op, since each player can search smaller sections of the large level instead of one person looking for everything.

The game has a slight Metal Slug feel to it, but perhaps the best comparison is “Contra meets Shantae“. It’s very pretty, very classic, and very accessible. Mercenary Kings arrives on PC late this Summer, and on the PS4 during its launch window.