When Nintendo unveiled Super Mario: I Hate Mondays edition, my initial reaction was disappointment. This isn’t the “next” 3D Mario game I was expecting, in the way Super Mario Galaxy was, but rather just a 3D Mario game. But after a good amount of time with the demo I have warmed up much more and I’ll be damned if Princess Peach isn’t adorable in that cat suit.

Right off the bat, its clear to see this is in the same style as Super Mario 3D Land on the 3DS, from the perspective shown in the levels, to the bite size areas you can run around in. This time, multi-player is added to the mix. This seems to be a new staple in Mario platformers now, for better or for worse. Although, you now have the ability to play as Peach instead of another generic Toad character, marking the first time since the US version of Super Mario Bros. 2 that has happened.

In fact, in the same way that Super Mario Bros. 2 was a little “off” (but still great), the same looks true for this new 3D adventure. Sure, it is still recognizable as a Mario game, but there is a certain je ne sais quoi that makes this game feel just a little weird, and not necessarily in a bad way. The first being the cat suit. I don’t recall a powerup in the series transforming the characters so much visually. They run and claw up walls like cats, even running out of momentum and defeatedly sliding down the wall leaving behind scratch marks. Peach even has a cute pawing-in-the-air action in the cat suit for her signature floating ability. You can dive bomb enemies, scratch them to bits and bat around a ball in the cat suit. 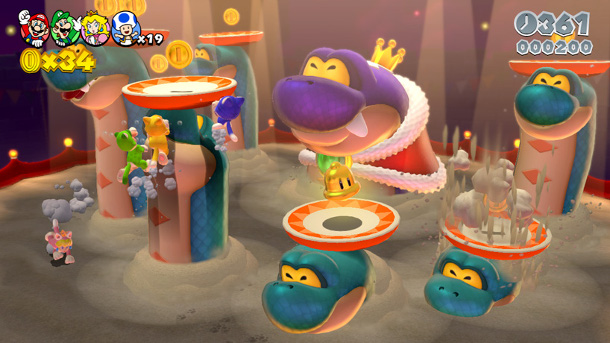 The four selectable characters have basically the same attributes they did 20 years ago in Super Mario Bros. 2, plus modern moves like the butt stomp, the somersault flip and long jump. Mario is well rounded, Toad is quick, Peach can float but is slower, Luigi can jump far. Super Mario Bros. 2’s main game mechanic was plucking things from the ground and hitting enemies with them. Here, you still squash enemies by jumping on them, but there looks to be a much greater focus on picking and throwing items than has ever existed in a 3D Mario game.

The demo had a good variety on display, from a basic “1-1” type level to a “vehicle” level, and a boss fight. The normal platforming levels were standard fair for a 3D Mario game. The new gimmick being shown is the translucent tubes which, if you stop and think, makes you wonder why you are only just now seeing this 30 years later.

The concept is good but I personally thought the execution of introducing these translucent tubes in the world was not fun, and down right infuriating with multi-player. When you enter the tubes you can only control the direction — left/right/up/down — until you reach the other end. This turns into a timing game as you try to enter the tubes and traverse a path with out hitting obstacles or enemies that live inside the tubes. They play with this even more by having a warp box closed off until you can worm through all the tubes and collect little keys, all while avoiding enemies or other players who may be doing the same. I could see these tubes getting quite difficult to manage in later parts of the game, and provide overall frustration since you can’t do anything to change course if you were a second late on a button press.

Another slightly annoying trope carried over from the muilt-player Mario games is the “death pause”. I suspect many have learned to live with it, but it is still initially awkward wondering why your character stopped moving just because someone fell off screen or grabbed a power up, so its worth mentioning it still exists in this outing. The Gamepad doesn’t play into the game too significantly; you can touch enemies on the screen to stun them, or reveal silhouetted coin blocks or items. However, this seems more useful if you are playing with a child, or more as a helper role. It is also worth noting that during multiplayer games the camera seems aggressive in following the lead player.  It is all too easy for a cat suited Mario to run ahead and leave the others in the dust.  I wish they could pull the camera out as far as possible even if it meant tiny specs on the screen, so at least the lead player would be keyed into the fact others are far behind.

A final critique on the core game play exists with the cat suit power up. As I watched many people playing, once they discovered they could climb up a wall that is all they tried to do. And, many seemed to have difficultly getting off the wall correctly. For example, once reaching the top they would just jump, which caused a wall jump in the opposite direction. This happened over and over. Often people thought they could get close the the top before running out of steam, and then jump up to the ledge. I too found it frustrating at times. It was just slightly awkward for a series that is known for unparalled control systems. Here is hoping that can be tightened up once the game ships this holiday season.

But all in all, this looks to be a grand culmination in all of Mariodom from the last 30 years, even if the Galaxy influence seems lacking in this one.