Man, sometimes the magic just isn’t there and the machine is outdated.

Shadowrun Returns began life as a Kickstarter success: nearly $2m on a $400k goal, heralded by a charming introduction video by the head hare at Harebrained Schemes, Jordan Weisman. (The video also included an apology for the 360/PC Shadowrun monstrosity, which I think we all deserved.) The project was to be a return to the cyberpunk techno-magical future for tablet and PC – and thanks to stretch goals, Mac as well. A year later, we find that a more accurate platform description would be “tablet… oh and PC as well.”

Really, I don’t know why it took me almost four hours to realize that I was playing an iPad game. Every interaction you have in Shadowrun Returns is facilitated by pointing your mouse and left clicking. This, clearly, is meant to emulate the touch controls of a tablet. Whenever you want to change which special attack or spell you want to use, you click on a prominent, colorful button to open a flyout menu of more large buttons. Opening the options menu or your character’s info sheet takes up two thirds of the screen so that each icon or entry can be discerned on a smaller tablet screen. 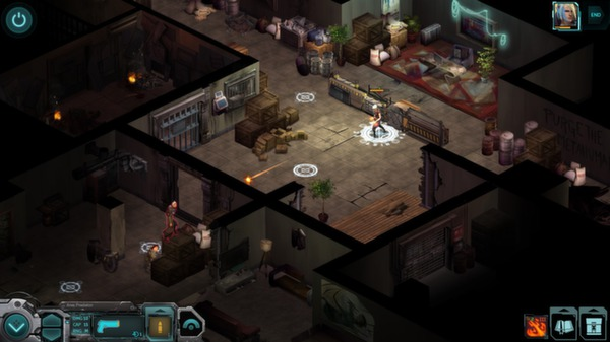 But why? If I have my shotgun selected, why not have all of my optional attacks listed on a hotbar at the same time instead of in a flyout menu that looks like it was designed to hold twelve large icons even though it will only ever have four in it? Why doesn’t right clicking tell the character to move and left clicking tell the character to perform the selected action? More than once, I accidentally wasted action points and put myself in a bad position by moving instead of shooting as I intended.

Even more than the single-mouse-click interaction with the game, its tablet-heavy nature is readily apparent in the entire visual presentation. For example, while playing the game at the office (coffee shop), an esteemed colleague (barista) stood behind me for a couple minutes and asked me why, why on EARTH, would I be playing a Facebook game when there are so many better games ready to be played? It was a fair question.

Screenshots of Shadowrun Returns look quite good, and many of the character portraits are unique and interesting, some even charming, but once bodies get in motion the charm quickly evacuates. The animations aren’t especially ugly, but a vast majority of them are certainly half-hearted. Running, taking damage, firing a weapon, casting a spell – all of these are accomplished with minimal effort by the character. Imagine a psionic-powered ninja Adept sprinting to an enemy, sword raised in an intimidating attack position. He gets to his target only to stand upright, raise his sword arm, and bring it back down in a straight vertical line. It’s deflating. It’s like doing mo-cap with LEGO figures.

This technical impediment intersects most obviously with the ‘flavor’ side of the RPG in the presentation of the Matrix, which is the hyper-90’s version of what pop culture thought hacking the internet was like. In Shadowrun Returns, the Matrix is used by deckers (more on Shadowrun nomenclature in a moment). Deckers are used to steal information, manipulate security systems, or generally be pains in asses. These sound like an intriguing utility, but the problems become apparent quickly. First, outside of the Matrix, deckers are essentially dead weight. They can make enemies easier to hit by your team, but even that effect is unreliable. Their combat skills are, understandably, minor, and their real life bodies must be protected by allies while they are busy fiddling around with their virtual shenanigans. But I would say that all of that would be an acceptable burden if using the Matrix was, itself, fun. Instead, the Matrix plays exactly like the physical world with a different tileset. Movement and combat use the same interactions all the other characters use, except the decker is on a time limit before the system’s security responds to her intrusion with digital brute force. 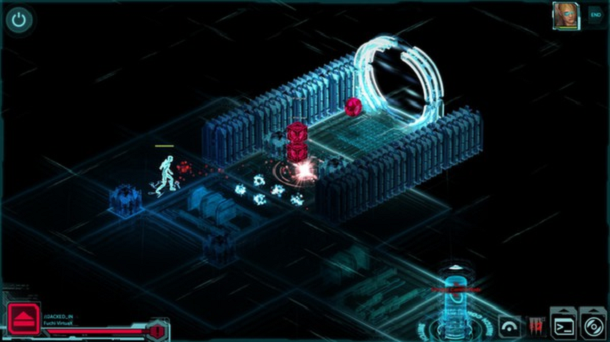 But what about the role-playing part of the RPG?

Alongside the tactical combat, dialogue with NPC’s is how the player will be spending their time. The conversations seem more like speeches for the most part, existing to give you information and provide a bit of seasoning for the world and the characters in it. In this, it doesn’t fail but it also doesn’t excel. Often when given dialogue options, I found that it was not uncommon for the choices to be very similar to each other both in tone and intention. A lot of times my options felt like the difference between saying “Yeah,” and “Sure.” But, with the exception of choices locked behind a character-stat wall (either being high enough in an attribute or having a specific characteristic chosen at character creation), I never once felt like any dialogue choice I made caused any meaningful reaction at all. It’s like a choose-your-own-adventure book where every choice just has you go immediately to the next page.

This is compounded with the recurring problem that video game RPGs have always had with any kind of dynamic story, and that is limiting my options as to what I can ask an NPC about based on whatever that NPC is programmed to talk about at that time. For example, while investigating a murder scene, I walked over a couple blocks and spoke with a friend of the victim. The friend gave me an extremely interesting clue that later proved to be the link between the multiple murders that had been occurring. I returned to the scene. When speaking with the coroner again (the coroner, Dresden, is most certainly my favorite NPC in the game, and I desperately wish he had more screen time), I had no option to bring up a very relevant question that would have been entirely reasonable to ask simply because that’s not what the game wanted me to do at the time.

As the story unfolds, plot points alternate between exciting events that drive the narrative forward, and the cyberpunk equivalent of a Scooby Doo reveal.

“…and I would have gotten away with my demon insect scheme if it weren’t for you meddling orcs!”

While I am not an expert in Shadowrun (I owned the Second Edition book in the late 90’s), I know a bit of the basics.

A few decades before the action starts, the world ‘Awakens’ quite suddenly, and magic figuratively and literally explodes into the world, most notably in the appearance of dragons, spirits, and people becoming trolls, orcs, dwarves, and elves. Our social structures, not being prepared for that (something I think we can forgive them for), get dismantled and rearranged. National boundaries are redrawn or abandoned, city-states return all over the planet, and megacorporations begin asserting control over, well, just about everything and everyone. Fiction is fun, kids!

Yes, I know everyone will make that joke. And they should, because jokes are made for dealing with misery.

From the slums and sprawls of this new world come shadowrunners: mercenaries who will, for a modest remuneration, protect what you want protected, steal what you want stolen, or blow up what (or who) you want blown up.

The important thing you need to know is that the preceding paragraphs contain more background information than the game gives you. And that is disappointing. The Shadowrun world is exceedingly interesting, allowing for tones and themes ranging from gleeful and hyper-violent bombastic fantasy to tense and textured mediations on identity, man’s place in society, and what that society’s responsibility might be to itself and the people inside it.

Some of this evocative imagery shines through, but not enough. Cynical anti-capitalism is woven through the dialogue, though the impact of such may have been more easily felt in the boom era of the 90’s. For instance, this is a world in which the term ‘wage-slave’ is technical, not just rhetorical. My favorite scene utilizing the fantasy side of the setting was investigating an NTSB warehouse that was being haunted by the ghosts of plane crash victims because that was where the black box of their doom was being researched. 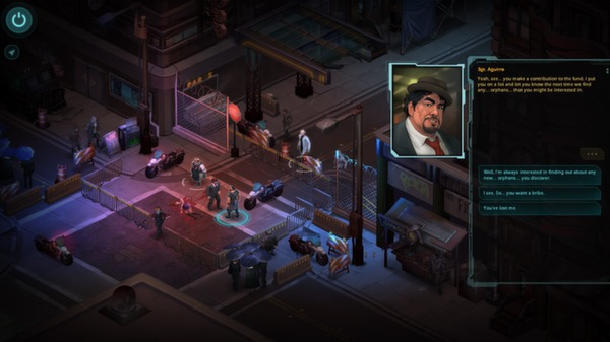 But why not flex the full creative muscle of the setting? That this is a world in which a magical dragon can be President of the United States is something that should be a bullet point somewhere.

Such absence of the background might be detrimental to some players in the form of the jargon and slang that literally everyone uses. And why shouldn’t they? They live there, that’s how people talk. But that’s not how players talk. Often, context clues allow for adequate understanding (it’s rather easy to piece together what “chummer” means, for example), but without being couched in a real understanding of what’s going on in the world it can easily come off as artifice for its own sake.

Admittedly, many of these complaints fall into the box labeled ‘Missed Opportunities,’ which is certainly not the most egregious crime one might commit. And while Shadowrun Returns is certainly not egregious, and might be enjoyed by anyone vested in the Shadowrun franchise or a tactical RPG fan looking for a decent tablet adventure, it comes up short in so many vital areas that it is hard to make a blanket recommendation on its behalf.

This review is based on a PC retail copy of the game sent via Steam by the publisher. 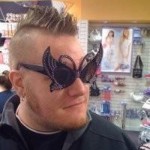 Andrew Minott is a freelance writer from Denver. He enjoys the finer things in life... like a quadra-kill off a stolen Baron, or eliciting blind nerdrage when he explains that Star Wars isn't actually science fiction.