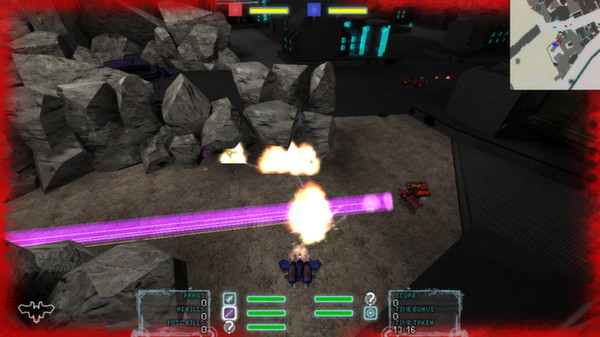 You may not be familiar with the Steel Storm series. Developed by indie studio Kot-In-Action Creative Artel, the overhead arcade shooter has been a noteworthy success story over the last two years, appearing in Humble Bundles and registering over 250k players in that time. While a sequel is being worked on, the studio has licensed the brand to fellow indie developers Zeolite Studios to expand on the idea.

Dubbed Steel Storm A.M.M.O., the game takes the main design of the series (hovercraft shmup) and converts it into an arena-based MOBA. To give it a fresh coat of paint, the dev was inspired by anime, utilizing an interesting mix of cell-shaded visuals and viewing angles. It appears fairly straightforward as a concept: arenas, multiplayer combat, and sci-fi settings seem difficult to design fail, really. With MOBAs quickly becoming the game genre du jour, players are becoming ravenous to try new games in the genre.

I’m becoming a sucker for this kind of competitive game, since it doesn’t seem to require too much of a build-up and knowledge of in-game skill sets to enjoy it. Just grab a controller and shoot each other, then rinse and repeat.

With a few aspects of the game still in development — matchmaking, crafting, and unique hovertanks are all coming — Steel Storm A.M.M.O is currently on STEAM’s Early Access.