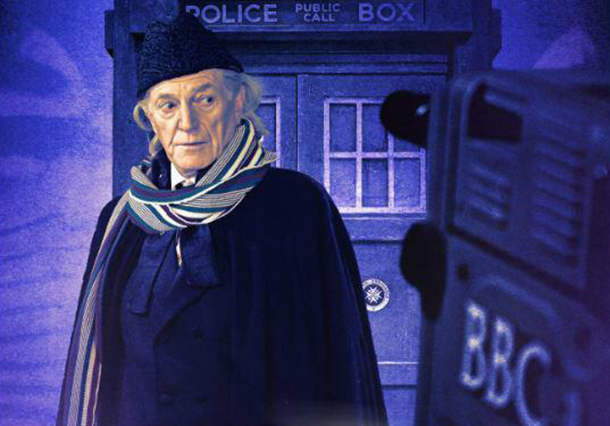 I’m in a tiny hotel room in Kaiserslautern, Germany this evening. It’s late, it’s cold and raining outside, and I’m tired from two weeks of a demanding project. I’m sitting on my bed, eyes red and dry. I’ve been weeping, overcome by emotion that I didn’t expect.

But it’s not the pressure of my situation that’s hitting me. No, I’ve just watched a piece of television about an alien, an old man, and lots of cigarettes.

I’ve just watched An Adventure in Space and Time, the dramatic take on the genesis of one of the BBC’s (and all of television’s, really) greatest shows. I had read about the creation of the show and watched enough of the older episodes to get a great feel for William Hartnell’s original take on the character. I was a fan of his work. His crotchety, sometimes senile demeanor was a perfect fit.

The movie builds on this legacy view of the man. Though he’s not initially the major focus, it quickly becomes apparent that it’s really about his regeneration from a “serious actor” into a serious career role, and how he not only guides the Doctor, but how he eventually becomes him.

Then, there’s a point in the film where Hartnell goes from being an angry Santa to a sympathetic elder man, where we see everything happening around him before he does. When he finally realizes it, it’s too late. His world pauses. Time stops. And the spiral towards his eventual departure from the show begins. That point is where my heart broke, and when my eyes began to well up. And they didn’t stop until the final credits (and then some).

David Bradley nails the part, too. As Hartnell was to the Doctor, Bradley is to Hartnell. I believed that he was Bill, much like I believed that Jim Carrey became Andy Kauffman for Man on the Moon. He captures Hartnell’s mannerisms with panache: there are moments where Bradley’s seemingly empty glares are actually filled with layers of introspection and doubt.

Bradley’s performance fuels the ride up the mountain.

In his moment of internal chaos, or perhaps most serene naivety, there is a beautiful shot in which he peers at his reflection in a camera lens, a reflection of the Doctor staring into the stalk of a dalek. Shots like this one litter the film, whether they take place from within the dalek bodies or using actual cameras from 1963, further connecting us to him.

This was his time, he was the star. But his star was dimming.

Wonderfully acted, terrifically shot, and culminating in a scene that will be remembered as much as any regeneration in the series. It’s impossible to hold back the tears. I know I couldn’t. This was perhaps one of the greatest Doctor Who programs in the history of the series.

I don’t know how the Day of the Doctor is going to top this.