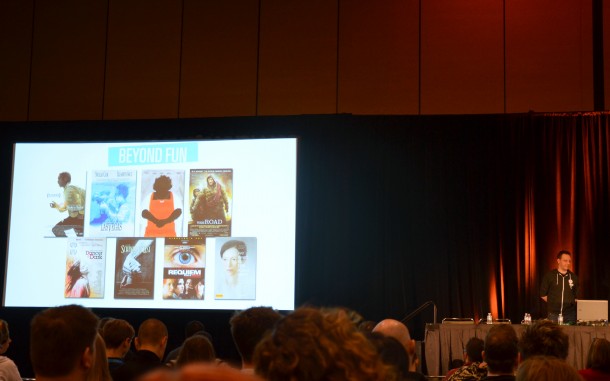 In an early presentation yesterday during GDC, Ubisoft Quebec’s designers Jill Murray and Hugo Giard discussed emotions involved in making a “risky” game. Using the Assassin’s Creed 4 DLC Freedom Cry as their talking point, the two went into detail on how to design around making a player feel uncomfortable and the implications that choice involves.

“Fun doesn’t become the question anymore,” Jill Murray, Narrative Designer for Ubisoft said. Fun is not an emotion for the player, she continued, citing movies such as 12 Years a Slave where viewers don’t watch for “fun” but for empathy. Hugo Giard added that building that strong connection requires game mechanics and narrative to be in sync. Of course the subject matter of slavery is a risky topic but the developers embraced the difficult subject matter.

“Sometimes the most complicated relationships between people and their world,” Jill Murray answered to the question of if something could be “too risky”. It “can be better explored through gameplay than a cinematic or a piece of gameplay dialogue.” Hugo Giard needed to contextualize this idea through gameplay. He solved that problem by changing the way the stealth missions worked. As a pirate, Edward Kenway’s punishment for failing a combat mission meant more combat. In Freedom Cry, Adewale’s punishment meant the guards would attack the helpless slaves resulting in an empathetic reason to not fail a stealth section.

Jill Murray finished the presentation by stating, “We need to apply as much human empathy as we can and read between the lines.” She hopes this will motivate other developers to tackle the riskier subjects with video games as much as it motivated the team at Ubisoft.

More updates from GDC 2014 will be popping up all week. Stay tuned!