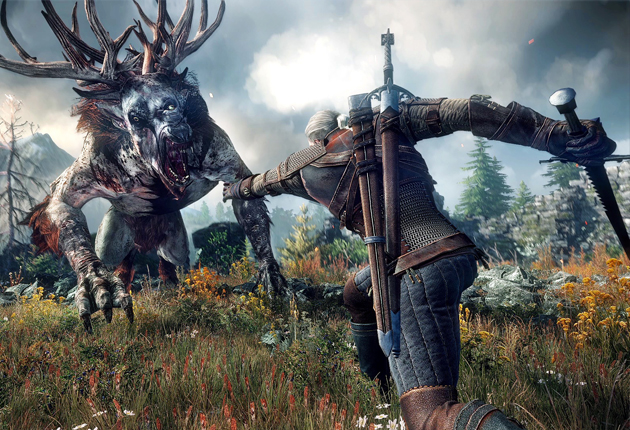 After four years and several delays, The Witcher 3: Wild Hunt is almost ready to see prime time, bringing closure and a much-awaited conclusion to the harrowing saga of Geralt of Rivia. Developer CD Projekt RED had a single demo unit tucked away in a secluded area at PAX East 2015, and we got a solid hour of play time with it.

So let’s get right to it.

The game opens by recapping the story thus far and offering up a basic tutorial to go over the controls and abilities at Geralt’s disposal, presented as if Geralt is going over the basics of combat with the young Ciri. The training method was a decision by the game’s designers to try to work generally boring tutorial missions into the story and give them some sort of significance, rather than the standard “Look up with the right stick. Good. Now look down with the right stick. Good,” type of approach that many games have taken in recent years.

The 15-minute prologue is a touching yet gruesome introduction to the characters and relationships that will undoubtedly be featured heavily in the many hours to come, but before I can get comfortable, the game flashes forward six months and changes scene. At this point in time, Geralt has left his base of operations and is scouring the countryside alongside mentor Vesemir in search of sorceress and former companion Yennefer. The two are led to a tavern to try and turn up any leads that might aid them in their quests.

Once we arrive at said tavern, the guided tour ends and I’m left to my own devices for the rest of the hour-long demo, allowed to pursue the main quest objectives or just dawdle around at my leisure.

I quickly gather some information about a woman matching Yennefer’s description — by bewitching and intimidating some local patrons — leave the tavern and spend the better part of an hour following the trails and checking out more of the world, which it turns out is pretty packed with stuff to do.

Hub areas like the starting village have a posting board where we can pick up a slew of side quests and activities right from the go. Side quests can also be found by just talking to random passers-by in our travels. In one instance, I come across an injured traveler who informs me that he had lost his wagon to a monster in a swamp, and wants me to retrieve a box from it. As I arrive at the site I find that the horses and caravan have been taken out by arrows, and I now have to investigate the area and uncover the truth of what’s happened.

It was a really nice way to show off how a seemingly innocuous side quest could take a really dark turn halfway through and end up being not at all what I had expected.

I really can’t stress enough just now gorgeous the game looks. The game was running on a beefy machine provided by Nvidia for this demo specifically and running at a resolution of 2560×1440. Vistas go on for miles and the facial animations are the best I’ve seen in a long, long while. They even managed to get the eyes to look right, which is where other games with fantastic character animation and motion capture tend to go wrong and plummet smack dab into the uncanny valley, never to be seen again.

Social Media tends to go on and on about graphics and what it means to be “next gen”, but I’ve never really gotten into the discussion. This was the first time I have ever actively thought about the jump in technology. This is what I have unknowingly hoped that a “next gen” game would look like in 2015. Even the grotesqueness of its violence manages to be beautiful, and that’s not something I ever thought I’d say.

I’d be remiss to not mention that the game also controls incredibly well, which is good because combat is just as difficult and technical as ever. Switching between the proper armaments, abilities and traps in the midst of combat is confusing at first, but becomes second nature after a few minutes. It definitely feels like it’s the best controlling game CD Projekt RED has made to date.

Unfortunately, the developer has “no current plans” to release updated versions of the first two entries in the series for current-gen consoles, which makes me worry about it being a bit too intimidating for new players of the series who want a graphical powerhouse to show off on their fancy new consoles. For those new fans, recap trailers will be enough to catch up; for the rest of us, we’ll be knee deep in the familiar, yet greatly improved Witcher experience.

The Witcher 3: Wild Hunt is slated for release on PC, Xbox One and PlayStation 4 this May.