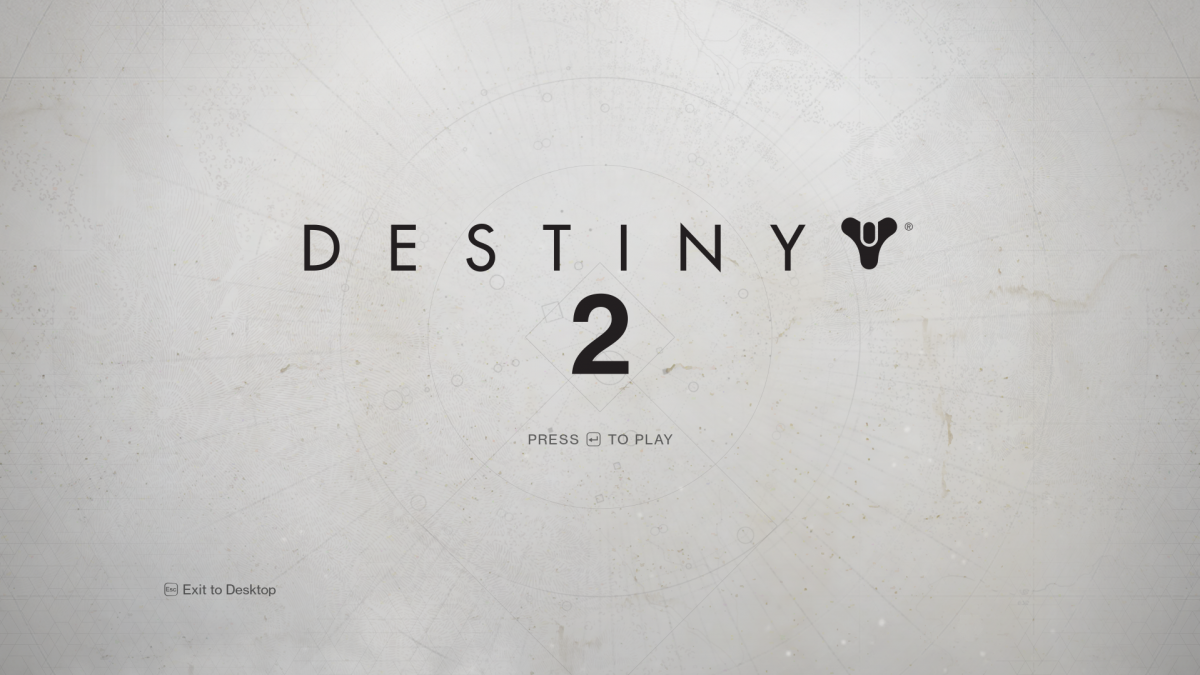 They say if you don’t have anything nice to say about someone, then you shouldn’t say anything at all. Taking this ancient wisdom to heart, I will say this: Destiny 2 plays very well.

Running around feels mostly fine, thanks in part to being able to select between three different types of jumps. In previous Bungie games, I hated the jumping. There was always a disconnect in my brain between ‘man in suit of armor’ and ‘jumps like Luigi’, so I dropped that series very, very early on. In Destiny 2, I can trick my brain into being fine with it by using the triple jump. The shooting, too, feels good — most of the time. I point at a thing, bullets hit the thing.

Occasionally my arm twitches and a shot goes wide, which is fine, except sometimes the aim-assist kicks in and a shot that should be twenty feet to the left of an enemy somehow hits them, which feels wrong.

It’s pretty to look at, too. Like, my computer is not what could be described as ‘top-of-the-line’, but even on my machine the game still runs smoothly and looks very nice.

If reviews were only meant to cover the things a game does right, this would be my closing line. That’s it. That’s all I could come up with for things to praise about Destiny 2. Having said the nice things, I feel like I have adhered to the letter of that previously mentioned wisdom. I have said the nice things, and so now I’m free to say the rest.

The various enemies are basically indistinguishable and interchangeable, to the point that I didn’t realize the first two factions you bump up against are actually two factions. I went from fighting large bad things, to those large bad things being supported by thin purple things, to fighting other thin purple things. Somewhere in there it became a different faction, but they all just shoot at you, and you shoot them until they die, and then you do that again and again.

Sure, why not. It doesn’t appear to have any actual bearing on the game. They might as well have suggested that my efforts spawned a thousand new factions who all annihilated each other off camera. It literally doesn’t matter.

Likewise, the story is pointless. There’s a bad guy. He wants the big metal ball. The guys in red are his soldiers. Okay. Sure. Why do I give any amount of shits about everything else in this story, again? Now I’m fighting the Fallen. They don’t seem to give a shit about any of this war stuff happening. Kill ’em anyway. Oh, hey, now I’m fighting robots. They also don’t appear to have any opinion on the big metal ball, but they started shooting right away, so they die.

There’s no chat. In a multiplayer game. You get a text chat when in a team or a fireteam, of which I have no idea what the difference is, because there’s no normal chat, and so you cannot talk to anybody you might encounter. If you happen to feel like you work well with someone you see out in the world, at a public event or something, you can’t suggest a team-up. That functionality just doesn’t exist in Destiny 2.

Which would be infinitely more aggravating, except the game is fucking empty. I started playing it day one on the PC, and I can count on both hands, with fingers left over, the number of players I have actually encountered out in the world. I’ve seen more in the social hubs — you know, those places where the tools for socialization don’t exist — but actually out playing? Not so much. Of those people that I’ve encountered organically, I’ve actually seen maybe half.

The rest are disembodied names and numbers, floating around in the distance, doing their own thing. Are they willing to stop what they’re doing to come help me as I try and fail this public event yet again, because I’m the only one doing it? I have no idea. I can’t ask them.

I joined a clan. A friend started a clan, and so I joined it, figuring I’d at least be able to talk to them. Nope! There’s no clan chat either, and worse than that, the list of members in the clan doesn’t ever load. It just sits on the ‘loading’ portion, never resolving. Who in my clan is online? I don’t have a clue. I can’t see the list to figure out what anyone is doing. I can’t ask them what they’re doing, either, because there’s no clan chat channel.

Destiny 2 might as well be a single player experience for anyone who doesn’t have some sort of group they made outside of the game. Thankfully, there’s Crucible, the players versus player component. The game begins prompting you to start queuing for Crucible very early on. I was around level 6, with a item level of something like 38 when it suggested I play two matches. So I queued for some Crucible, and promptly ended up in a game full of people at max level, with incredible items. My team, having fewer players with the good shit, promptly lost every round.

I queued again, because fuck it, and then the same situation happened, but on the enemy team several of them quit immediately upon discovering their side had someone who was only a measly level 18. So we won. Then I grinded a bit more, and at level 11, and item level 130ish, I queued for the straight up death-match style of Crucible, where I lost twice to a full team of 20s, all in the same clan, who were one-shotting me and two of my not-level-20 teammates.

As best I can tell? The PVP doesn’t have any kind of proper matchmaking. I’m certainly no expert on how matchmaking works, but you would think, bare minimum, if the game is pushing you to try PVP an hour into it, there might be separate queues for everyone at the max level and everyone not. Bare minimum.

Groups of friends can play bad, boring games and wring some sort of fun out of them, but that’s not because the game is fun, it’s because it’s fun to do things with your friends, and a game — even a bad game — is something to do. Play one of those games alone, and it’s just a bad game.

Destiny 2 goes out of its way to prevent you from communicating with everyone else playing Destiny 2. It’s a boring game that is actively working against you ever getting a situation where you can derive some amount of fun out of it. If you planned to make some friends inside Destiny 2, give it a hard pass. You basically can’t. Without that, good shooting just isn’t enough to make it fun.