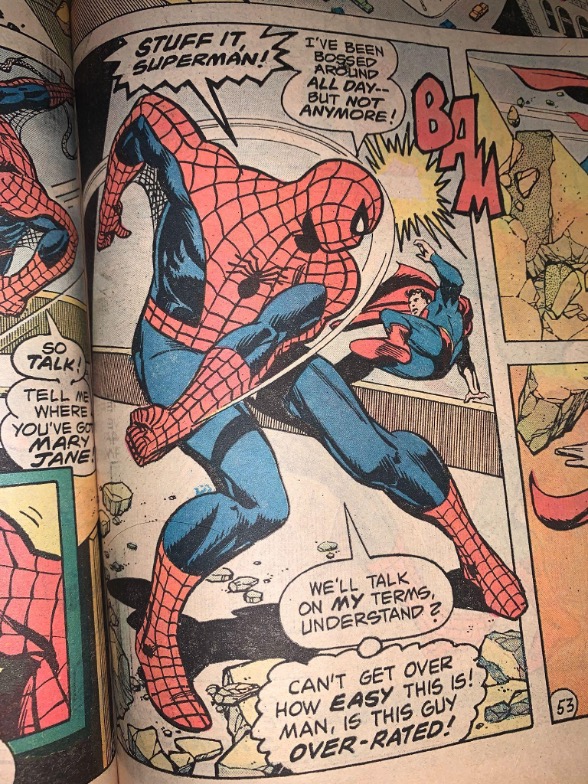 Another week, which means it’s another New Comic Wednesday and so here we go with this week’s picks, reviews, and throwback!

Dark Ages #1 – Tom Taylor has been doing some great high concept non-canon stories for DC in recent years such as DCeased and Injustice and here he’s here at the Big M ready to absolutely destroy the Marvel Universe.  A new evil was created for this mini-series that decimates the planet and leaves it with absolutely no power plunging it into a…well…Dark Age.  It’s a non-canon story, so the stakes are high for everybody and heroes will fall and I can’t wait to see where it goes.

Batman Fear State Alpha – Time for another big Batman arc! When all else, bring out the entire Bat Family.  I am only suggesting it because Batman has been pretty consistently good these days and this one has the Scarecrow in it, which is one of the best members of the rogues gallery.  Also it will introduce a new character named anti-Oracle? Which is stupid and I love it.  Can’t wait to see what that is.

Ultimate Fallout 4 Facsimile – As of writing, this is one of the hottest Spider-books right now.  The value for a high graded original issue is going for upwards to 1500 dollars.  This is the debut of Miles Morales and so the speculation market is pricing it out of most collectors’ checkbooks.  Marvel and DC are doing a wonderful job doing facsimile editions which are reprints that go above and beyond just reprinting the original comic content, they reprint them complete with original ads and covers with minor changes like updated prices.  This is a great way to get the original comic in your collection without having to give up your food budget for a while.

Amazing Spider-Man #72 – This run of the Amazing Spider-Man is charging right towards a conclusion.  We’ve been teased with this new villain for the bulk of this and they’ve done a good job keeping the true identity under wraps, even though we’ve all assumed that it’s Harry Osborne.  But it’s definitely starting to not appear so.  The big reveal of this issue is something that is going to absolutely split the fanbase to a ridiculous degree.   It’s revealed that Norman Osborne made a deal with Mephisto years before the Green Goblin was even an idea in order to become successful and rich at the cost of his son at some point down the road.  Between this and the upcoming No Way Home movie, Marvel is really going out of their way to make you think about One More Day which is a very mean thing for them to do.  But Mephisto just can’t get enough of the Spider People.  Just constantly getting all up in there.

King Spawn #1 – Spawn, baby!  You know Spawn. Todd McFarlane created a dark brooding character in the 90s that has inexplicably lasted well into the 2020s and has become one of the most enduring creator owned comics of all time.  Well past 300 issues, it’s a record breaking franchise and this is the first new ongoing Spawn series since the 90s and it was worth it.  Starting off with a horrific violent act you can only really expect as a teacher is reading Psalm 137 to a class of children and then blows up the school, we get Al knowing that this is a message being sent to him and he goes on a journey, leading him to an eviscerated Metatron. Another sign that somebody is sending a message to Spawn and boy howdy, does this seem like it’s going to be a RIDE.  After the main story, you get several more back-up stories reintroducing you to several more members of the extended Spawn family.  Incredibly good stuff with beautiful art.

Darkhawk #1 – Wow.  Ok.  This is kind of a deep and sad debut for a new superhero. We are introduced to Connor Young, a star high school basketball prodigy just dominating the court.  His future is bright, and he’s the star of the town.  You know the story.  This plays out time after time after time.  After a big game, he’s in the locker room and has some kind of event that seems like it should be a little worrying.  His friend consoles him and the head off just to see a huge police presence at a robbery and bumps into a former star player form the same high school and you immediately realize that this dude is the dude responsible for the robberies but whatever.  Going for a run the next day, he has a similar event and takes a header right into the concrete and you are kind of just expecting this to be the Darkhawk amulet calling to him or something but no.  The MRI comes back and it’s MS.  So yeah.  Bummer.  Without going to much into the rest, the amulet finally makes its appearance, Connor gets the amulet, turns into a new version of Darkhawk, and stops another attempted crazy robbery event that is of course later revealed to be part of a crime ring headed by the former star player and his best friend is involved.  It’s an absolutely WILD ride for a first issue that’s a reboot for a goofy 90s edge comic.

DC and Marvel Present Superman vs. The Amazing Spider-Man

I collect comic books.  That’s pretty obvious.  Especially if you follow me on Twitter.  My absolute favorite sub-genre of comics is the intercompany crossover.  The first time Marvel and DC ever worked together on a book was in 1975 on a giant Treasury Edition adaption of The Wizard of Oz.  This opened the door to more potential collaborations and in 1976 we got the first ever intercompany superhero crossover event in a Treasury Edition of Superman vs. Spider-Man.  How do you hook these two characters up in one story? Well, it definitely can’t be contained to a normal comic, so it’s contained within a giant sized Treasury Edition.  If you haven’t seen a Treasury Edition before, think of it as a giant magazine size.  Even bigger than a magazine. The story is broken into several chapters.  Prologue One is a Superman story, Clark is taking on a giant robot destroying the city.  The robot is obviously being piloted by Lex Luthor because this is a crossover and it needs to be the biggest villains.  Epilogue 2 is a Spider-Man story.  Doc Ock is just doing his normal Doc Ock stuff.  He even disguises his Flying Octopus as the Goodyear blimp.  Anyways, the third Prologue is both the villains being locked up in the same superjail in New Mexico and breaking out and teaming up.  Now onto the main event.  So everybody is at the same place because it’s a comic book and they need to meet.  Parker saves Lois who has fallen again because that’s all she can do for the first 4 decades of her comic life.  Superman swoops in and kidnaps Lois and MJ.  This surprises Peter and Clark Kent very much especially since Clark knows who Superman is.  Turns out it was Luthor pretending to be Superman and this leads to Spider-Man and Superman duking it out.  Spider-Man handles himself pretty well but then Kal decides to not hold back anymore and just lets Parker HAVE IT.  Parker breaks his fists on Supes chest and that’s when they finally come to terms to the fact they’ve been duped.  Of course now the rest of the book is them teaming up and saving the day and obliterating Doc and Lex.  There are better company crossovers than this one, but you can’t help but just be completely absorbed into this whole comics thing.  It’s a landmark comic book and is just as fun now as it must have been all these years ago.  It also gave us this great panel of Spider-Man telling Superman to stuff it.