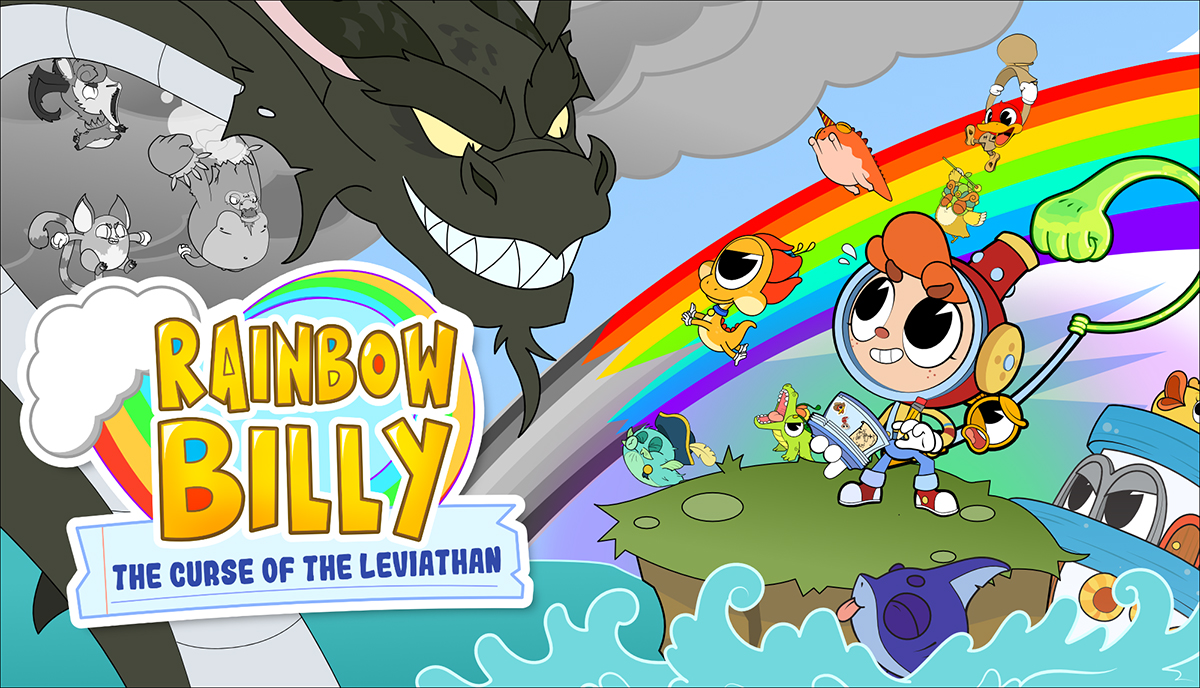 To talk about Rainbow Billy, we need to go back to its origins. Conceived as a crowdfunded project called Steamboat Billy in the Curse of the Leviathan back in 2017, it entered Kickstarter with a noticeably different identity; acknowledged by players immediately, the project once successfully funded entered production.

Then, like many things, when COVID hit, everything changed and the development cycle got extended.

Still, Billy matured, outgrowing its initial inspirations. No longer Steamboat, it became more colorful, got upgraded combat systems, and its world went full 3D instead. Rainbow Billy: the Curse of the Leviathan was reimagined.

The game now starts at a festival, where Billy has to support his friends with the arrangements for a fireworks display. Somehow the materials have all scattered, and so Billy sets off to pick them up from all around the square where the show will take place.

It doesn’t take long before Billy finds every piece and meets many of the main characters that will be part of his journey, including his steamboat. As the celebration goes on and the fireworks are lit, they produce a lot of noise, awakening the Leviathan living below the island. The furious beast curses Billy and the entire world with darkness, drawing away everybody’s color and changing everything to black and white. Billy and his steamboat manage to escape, making it into one of the very few places where color remains. This is where the real adventure begins, as Billy’s quest kicks off to subdue the Leviathan and break the curse.

The game’s mechanics are broken up into three very straight forward themes and as their creator points out, they sought to do a mix between The Legend of Zelda: The Windwaker and Pokemon. You traverse the world both using your steamboat, to navigate the sea, and later on foot when you reach an island. At sea, you need to make the most of the limited amount of color fuel still at your disposal, making a priority to reach the nearest island so you can dock and recharge. Later on foot you explore each island, trying to uncover a way to secure one of the 3 orbs the Leviathan has scattered away that would bring back color to the world.

Once on the islands you will find either a challenge or a series of creatures native to each of the three areas you will visit throughout the game. The challenges are pretty straightforward, using a series of environmental cues like moving boulders or snowballs to block or create a path, switches that will produce items or activate moving platforms. As you progress, more mechanics come into play to create a bit of variety and complexity to the puzzles.

Then there’s the combat in the game that you can define in two phases; the first one is sort of a preparation, where you meet your enemy and  learn more about them. At this point you have a brief conversation where you can select from a set of responses, and depending on the selection it will either bring a negative or a positive reaction from the enemy. A positive reaction will create a potentially easier encounter and sometimes even avoid confrontation entirely, while a negative one will create a harder condition for defeating it. The encounter takes place on a board in classic turn-based RPG fashion that will probably feel familiar to most. First you select your combatants based on the enemy’s missing colors, and if you have the right colors then you set them on the board to engage. Once you are done, the turn ends and the coloring takes place. To be successful a minigame is triggered depending on each creature you’ve placed as the first to act in each of the lines. This is one of the best parts of the combat, keeping it fresh. A roulette wheel may pop up where you have to match 3, or dodge ball, or a pong like game, or even a Simon Says button press sequence match. There are many minigame variations, and being successful at them will create the colors that affect the enemy, eventually filling them in for the win.

Each creature you defeat becomes an ally, giving your repertoire of colors and minigame combinations more options. And, as you obtain items or consumables, you can enhance their moods for new perks that can be used in combat to create better conditions or combinations.

This is the other side of Billy; in most games enemies are just thrown at you to defeat, but here you might learn much about their personalities, wishes and fears. This is one of the things that defines Rainbow Billy the most, as it wears its intentions right on its sleeve and pulls no punches in explaining that each of these creatures, due to the loss of color, have been affected in many different ways emotionally. When you meet them it is Billy’s kind heart that helps them overcome and open up to recovery from their trauma.

This, in time, forms a bit of a domino effect, as many of the creatures you meet are connected or recognize each other. Once you have helped them recover their color and restore their identities, they initiate synergies that can be favorable to their friends not yet colored, providing a sense of progression and also the urge to locate and save them all to experience more of their backstories.

It is here where Billy also defines itself, as the relationships between these creatures can be as straightforward as friendship or as vast and compound as the colors of the rainbow, keeping you on your toes on what each creature will reveal and explore about themselves and others related to them. All of this helps Billy eventually face his demons and conquer his own emotions and traumas.

The game shows you hints on why Billy is the way he is and with it, creating more insight about the world in which everyone lives. As you make progress it lays out more, relying on one of the finest pieces you will experience in the game, a string of short cartoon-like cinematics bringing critical moments to life. These little scenes make you feel like Billy is bigger than what you at first thought, and you would not be blamed for assuming it was inspired by a long running Saturday morning cartoon.

Rainbow Billy and the Curse of the Leviathan, I would dare to say is the definition of an Indie game. It provides you something to play that is entertaining, and also tries to harness and deliver a message for the player willing to listen. It does the most with the time you decide to invest in it, never overstaying its welcome.

Billy is accessible, its mechanics forgiving and its puzzles straight forward. You are unlikely to struggle or repeat anything because of the game’s difficulty. When you fail, if you do, you will realize that was all on you. It wants you to enjoy your time in this world and meet the characters that live in it. Most of all, it wishes you to befriend Billy.

And this is my only gripe with the game. Its best story, where its heart and colors really glow, is deeply buried at the end. This is a shame as it should have been experienced throughout the game by anyone playing it.

This game can be enjoyed by a wide range of players. For younger audiences it’s a great introduction to classic turn-based RPG combat while also mixing it up with puzzle solving and adventure elements to keep things interesting. For more seasoned players it will maintain things moving forward with familiarity and a few refreshing twists, allowing more of a focus on the plot.

Now, what makes Billy more than it seems, is the way it touches on deeper emotions with its characters. It could be a powerful tool, specially for kids and parents, to explore and talk about emotions and how to manage and express these feelings in a healthy way. It will probably hit close to home with older players, too, giving insight in a relatable and personal way, making them aware that everyone struggles with this types of situations at some point, it may even enhance and reinforce their emotional intelligence. It might feel awkward at first, but it’s a well intended effort to explore these things and at a most needed time for many.

If you are in need for a feel good experience and a hug from gaming, Rainbow Billy will certainly feel like one by the time you finish it.

This review is based on a Steam code sent to SideQuesting by the publisher. Christmas came early! Rainbow Billy is 30% off on Steam, Switch and Xbox! If you have been waiting for the right moment – it’s now!