My addiction t o Halo: Reach is well-documented, and it was beginning to be a problem.  You can imagine my surprise when I found that the key to getting off the sauce had nothing to do with weening myself off the game by playing other FPS titles like Crysis 2 and Bulletstorm.

I went cold turkey.  In fact, I went with something completely different: a puzzle/RPG game.  Capy’s Might and Magic: Clash of Heroes quickly became my go-to game.  For one month, Clash of Heroes became my new obsession, and I didn’t looked back.

Clash of Heroes’ success lies in the fact that it takes the great components of both puzzle and RPG games and leaves behind those that are less favorable.  For example, one downer about starting an RPG is that you often spend the first few hours being taught how to play the game.  It only took me about half an hour to have full control of my character and a good understanding of the battle system.  This was nice because the game didn’t waste any time throwing me into the fray.  More importantly, I didn’t have to get bogged down on lukewarm narrative introductions that gamers will find in most RPGs. 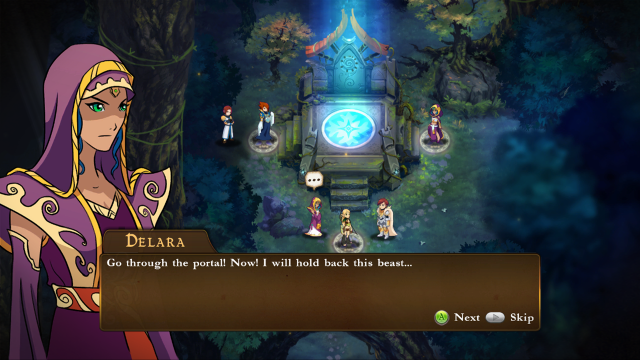 Although the story isn’t particularly amazing, it does contain charming characters, cute dialogue, and variety.  The campaign tells the story of five young heroes, each with their own chapter.  Each chapter brings you to five different kingdoms and allows you to take control of five different factions (from forest creatures to the undead).  The story did more than enough to keep me invested and a controller in my hand.

The game’s centerpiece is its battle system, an amalgam of a match-3 puzzle game and a turn-based RPG battle.  The board is divided into two sections, one for the player and one for the opponent.  Each player is free to move the back pieces from one column to another.  Attacks and defensive structures are queued up by matching three like units vertically and horizontally, respectively.  When an attack formation charges, the units charge towards the enemy’s side (attacking units at the cost of their attack power).  The remaining attack power left in an attacking  unit when it reaches the end of the screen is deducted from the enemy’s HP.  The battle system is simple enough so that I was able to grasp it within the first hour, but the game did a good job of presenting me with different scenarios so that I always had to think about what I was doing. 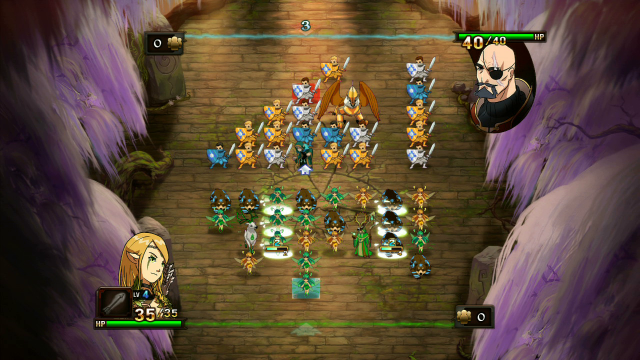 Certain units have special abilities that I constantly had to plan my strategy around.  Understanding these units sometimes meant the difference between winning and losing a battle.  For instance, one enemy in the campaign destroyed every unit in my second and third rows every other turn, making it near impossible to set up attack formations.  After being stumped for a bit, I found a ghost unit that I never used.  Although this wasn’t my strongest unit, its ability was that it was invincible while it charged, finally making it possible to form attacks and win the battle.

Clash of Heroes borrows more from RPGs in the fact that it’s possible to equip accessories, choose which units you want to bring into battle, and level up.  What’s pleasant is that the battle/puzzle system is so compelling that grinding isn’t a chore.

Might and Magic: Clash of Heroes was a very welcome surprise during a time when I couldn’t wait until I earned enough Halo: Reach credits to ascend to the next Spartan rank.  The narrative was charming; the five protagonists were likeable; and their chapters did a good job of constantly putting something new in front of me.  The puzzle mechanics were simple, yet nothing short of addicting.  Clash of Heroes was exactly what my “inner-gamer” was yearning for during a very dark, mundane time.

After designing one of my favorite games of 2011, I’m going to keep a close eye on what Capy will be working on in the future.

This review is based on a review code for the XBLA version of Might and Magic: Clash of Heroes.