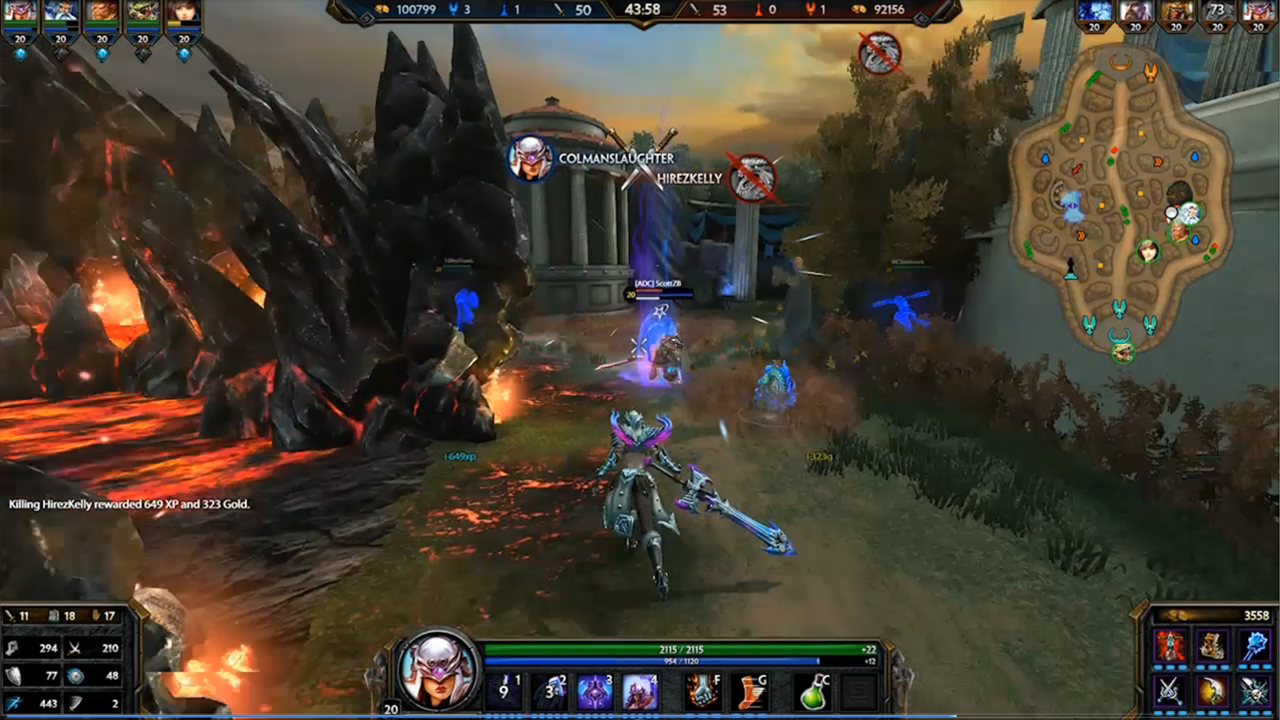 I admit, I haven’t been a huge Free to Play gamer on consoles. The biggest reason is probably that I don’t have as much time to dedicate to building up a character as I’d like to. I’m strapped for time, and just trying to catch up on my backlog from 2014 (and 2013, 2012, 2009…) is taking up a lot of my focus. I didn’t think I could get into a whole new genre yet, especially not a MOBA.

And then I had my hands-on time with the game at PAX East, and began to think: Hey, this is a pretty neat idea. I think I can handle this.

I had the chance to speak to Andy Anderson, Producer for the game’s Xbox One iteration, during the show to help walk me through their thought process in developing it, some of the issues they came across, and any pointers he could give me to jump in to the genre. 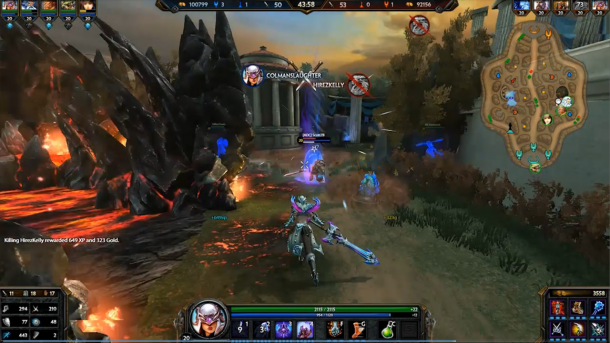 Dali: For those of us who aren’t as knowledgable about Smite, can you tell us what it is and how you made it to Xbox One?

Andy: Well, so, Smite is a mythologically-based multiplayer online battle arena. It’s third person action, over the shoulder, so that it really brings you into the game. It’s a MOBA, so we have our traditional conquest map, three lanes, a couple of towers, phoenixes, titans, 5 v 5 matches. You do item builds, you level up your abilities, all the things you need to do to create a strategy to win the match. Those can go anywhere from 25 to 45 minutes, depending on how competitive they are. So that’s the thirty second elevator pitch.

As far as how we got to the Xbox One, we had some people in our community playing with controllers. We looked at that and thought, “Hey, this is a really natural fit. You move the sticks and that’s where my character goes. What about doing it on a console?” We started thinking about that, and at the same time Microsoft was thinking, “Hey, this MOBA thing is pretty big, and we don’t have a MOBA game on our console. How about you guys bring this to Xbox?”

Andy: You know, honestly I’m not sure. I don’t recall who approached who, but it was probably pretty mutual. It gives them a MOBA and us an all new group of fans to get into the game. And that’s what it is for me, you know. You have this great game that’s proven to be really successful on the PC, and we want to take that same experience and bring it to a whole new audience.

Dali: What about the userbase on PC? Do you think there will be any shift from PC to console?

Andy: I suspect we’ll have a number of people that play on PC will play it on console, but I don’t think that’ll be a huge number by any means. I think we’ll see some that make the Xbox their primary playing hub but also play on PC some, and vice versa. I don’t have a lot of scientific numbers that prove it, but I think that we’ll see some situations where PC players will say, “Hey, I love this game but I have a lot of friends who own consoles and don’t get to try it. Now I can play along with them, too, and still play on the PC in my ranked league there.”

Dali: What was the hardest thing about bringing it to Xbox?

Andy: It’s hard to say that there was one hard thing, but if anything it was the UI. We had to rebuild it. To think about it from the standpoint of PC, the monitor is right here [in front of our face] and that makes it very easy to navigate and fill the screen and click on whatever you need to. Now I’ve gotta navigate with my controller and press buttons.

Dali: Right, and on a screen that’s several feet away.

Andy: Right. Now I’ve gotta read it, to navigate over to it, to process a lot of information quickly and make decisions. It has to be very intuitive. But we’re working on it. It’s still evolving. We’re getting a lot of feedback from our community, from the Alpha, and making those tweaks. Things like being able to filter the Gods by name, pantheon. On PC we can throw them all up there, but from a couch it needs to be easier.

Dali: Do you think there will be hardware limits in delivering the same content between PCs and Xbox One?

Andy: I think if anything, I think it will be the opposite. We have to account for the worst computer and the best computer. With an Xbox we know the specs, so delivering content should be easier.

Dali: Was it a challenge to map the Xbox One controller?

Andy: First of all, we have a very active community. We got a ton of feedback from them, and many suggested that using the face buttons would be perfect. However we have a few pro players in the office and they felt that wouldn’t work. You’d really need the shoulder buttons for specific actions, for the ones that are meant to be quick or reliable. So we have a few combinations of control styles.

Dali: Are you finding a big divide between pro players and those that are just starting off?

Andy: Yeah, definitely. It’s amazing how quick people are able to get into it and get good. It’s how I’ve been learning. If I see a pro player coming, I know I’m basically dead, but I’ve been able to pick up a ton by watching them.

Dali: Tell me a little about the Gods in the game. How are they chosen or designed?

Andy: Well, whenever we choose a deity we really like to make sure that it’s true to its history. We want to make sure that its strengths and weaknesses, its powers, all of that falls in line with the major characteristics behind it. Obviously we’re pretty lucky because there might be two or three different takes in one culture, but it’s all still based on reality. Or, that culture’s beliefs, I should say. There may not be lasers in that god’s history, but we’re trying to make sure that they thematically match.

Andy: It’s very hard to say, you know. We have a very dedicated fanbase on PC, but we also have a lot of casual players. We have our hard core players, which are the foundation for the game, but we also have the players that only play a few matches a week. The dream slate is that we have one Smite community. Different strategies and players will develop, but hopefully only because of controller usage and not location. One of the advantages of the Auto-Buy and Auto-Leveling systems is that they can let some players just jump right in and now worry about manipulating their characters. We hope that the players that utilize that might one day want to get more in depth and get interested enough to do it on their own and make their own paths.

Dali: Tell me a little about the competition you had back in January. I heard it had a little prize?

Andy: Haha, yeah. The little $2.6 Million dollar prize! Haha! It was great. We sold out, the site was great, we had a Media Day the day before that had over 80 people there. We showed the Xbox One version to Media for the first time, too. We had several teams from around the world.

Andy: Yeah, We’re early in China, especially this year, but we expect that to become a big emerging market for us.

Dali: How do you think Free to Play will evolve on consoles?

Andy: Well, I think it could end up as successful as on PCs, if not more. I mean, consoles provide a different kind of use, but I think it would at least function the same way. And the accessibility will work in that favor. We have a AAA-quality game that you’re getting for free, so I think we’ll be all right.

Dali: Andy, thank you for your time.

Andy: No problem, man. I look forward to seeing you online, hopefully soon.

Smite is operating in a Beta on Xbox One at the moment, and is due to release later this year.