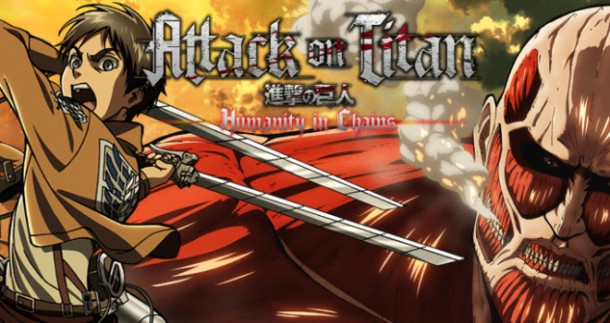 Ask any contemporary anime or manga fan what new series has stuck out to them in the past few years and chances are Attack on Titan will be one of them. Walking around stores like Hot Topic or f.y.e it’s apparent that the series has struck a chord with the American market, so it’s no surprise that Atlus would look to bring a game based on the series stateside. Attack on Titan: Humanity in Chains is indistinguishable from its anime counterpart in both story and character design. But while one plays out like a modern epic, the other is more of a fifth grader’s book report on that epic.

Attack on Titan is the story of humanity’s fight against giant human-like creatures (referred to as titans) who have slowly been devouring the human race. The remainder of society has hid behind giant walls in an effort to prevent any more losses. For over a hundred years humans have been safe until one titan managed to break the outer wall, forcing those who survive to flee to the inner two concentric walls. This overpopulation causes food shortages and unrest. For these reasons and a few more personal ones, the story’s protagonists join the military and are tasked with protecting the walls while also scouting outside for solutions to the mess.

Humanity in Chains blows right past most of this exposition and thrusts the player right into the action without really setting up any of the characters or diving into their backstories. It’s apparent from the onset that this game is not intended for interested observers, but for hardcore fans who have finished watching the series. The game’s story mode follows along with the show, but it’s more of just a crutch to set up gameplay situations. The game allows you to play as multiple characters from the show, sometimes in the same scenarios as the other. This is marketed as a way for players to view aspects of the situations from another character’s perspective, but this often just means a line of dialogue added to the mission briefing or a change of objective in the mission, like collecting food instead of killing titans. For fans of the series it doesn’t matter how these story beats play out because they will likely know exactly what’s going on with every character at any given moment. However for people that may be interested in getting into Titan for the first time, they may do well to be warned that understanding the plot could prove difficult. 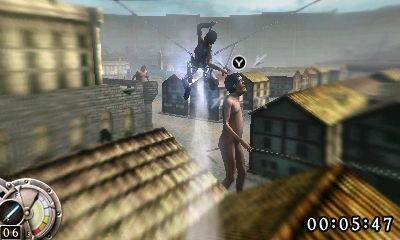 Once in a mission, players aren’t asked to do much. Players are tasked with either killing a set number of titans, defending an area, collecting a specific item or rescuing fallen soldiers. None of these missions ever play out in a particularly interesting way, but maneuvering to complete them is the best part of the experience. To maneuver, players will use the iconic Omni-directional Mobility Gear (ODM) from the series. The ODM allows players to jet around environments in much of the same fashion as Spider-man. This maneuverability is used to quickly move between buildings and latch on to titans to help bring them down. To bring one down, players must latch on to the back of a titan’s neck and slice through it. Once players are traveling towards a target and chose to attack, a sort of minigame will take place to see how good of a slash lands. Hit X when the blue circle sits in the red circle and a critical hit takes place. Both a player’s angle of attack and attack ability change the speed of which the blue circle moves and how large the red critical circle is. If players manage to land a crit to the back of a titan’s neck it’s almost always a guaranteed one hit kill. This lack of variation in combat seems boring but stringing together a number of successful titan kills back to back without touching the ground is a greatly rewarding experience. With that being said, the ease in which titans can be dispatched in game goes against the unstoppable forces that the series projects them to be. 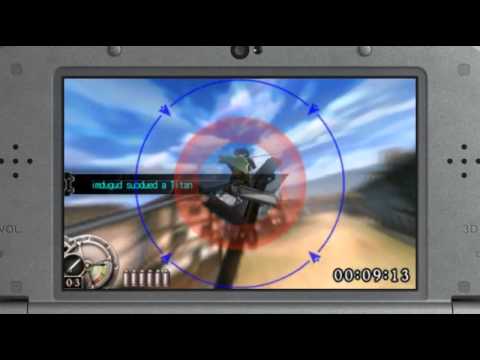 Story Mode isn’t where the real excitement can be found in Humanity in Chains, but to unlock World Mode where multiplayer and other exciting experiences are found, players have to put about three to five hours into Story Mode. This time could be seen as a sort of tutorial for the challenges of World Mode, but these experiences might actually hinder a player’s abilities. In World Mode players make their own characters and participate in missions to gain soliders, money and resources to upgrade their weapons, ODM gear or invest into the player’s base which unlocks further gear for the player to purchase. This adds longevity to the amount of gameplay there is, but because players’ World Mode characters aren’t as built as the ones from the Story players will have to adjust how they approach taking out titans.

As far as missions go in World Mode they are more unique than what is offered in the story. At times this simply means you may have to rescue some soldiers while also protecting the area they are downed in from titans. These missions certainly are of a higher difficulty, but thanks to hirable computer mercenaries or other players joining either online or locally they are more rewarding to experience. Co-op is truly where Humanity in Chains shines and luckily there is an abundance of missions built specifically with it mind. Scouting missions take place beyond the walls where humanity is taking the fight to the titans. These mission often require cooperation with human players, but offer the best rewards for upgrading a player’s character. It’s good then that online session run super smoothly even on poor connections. It should be mentioned though that if a connection is too weak and is lost while setting up a mission or in one, players will be kicked back to the 3DS home screen, requiring them to relaunch the game. 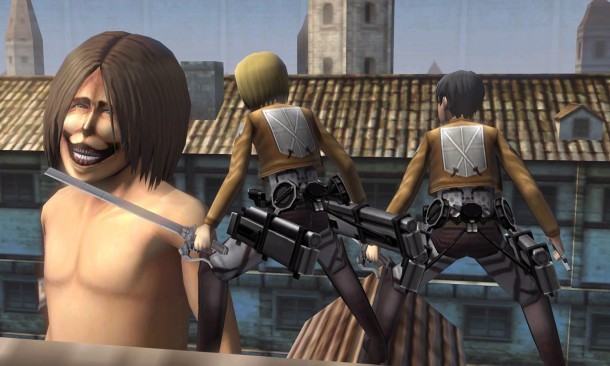 Attack on Titan: Humanity in Chains at its heart is a fun game. Story Mode is throwaway and missions get a bit repetitive, but the challenges and cooperation that World Mode brings it out of that hole. For some that won’t be enough, and honestly enjoyment of World Mode is really going to come down to a player’s willingness to grind through the content needed to unlock it and a want to play with other people. Because of this it’s hard to recommend Humanity in Chains to anyone other than a hardcore Attack on Titan fan. Gameplay may be fun, but without the knowledge of the epic that is Attack on Titan there’s little driving players here.