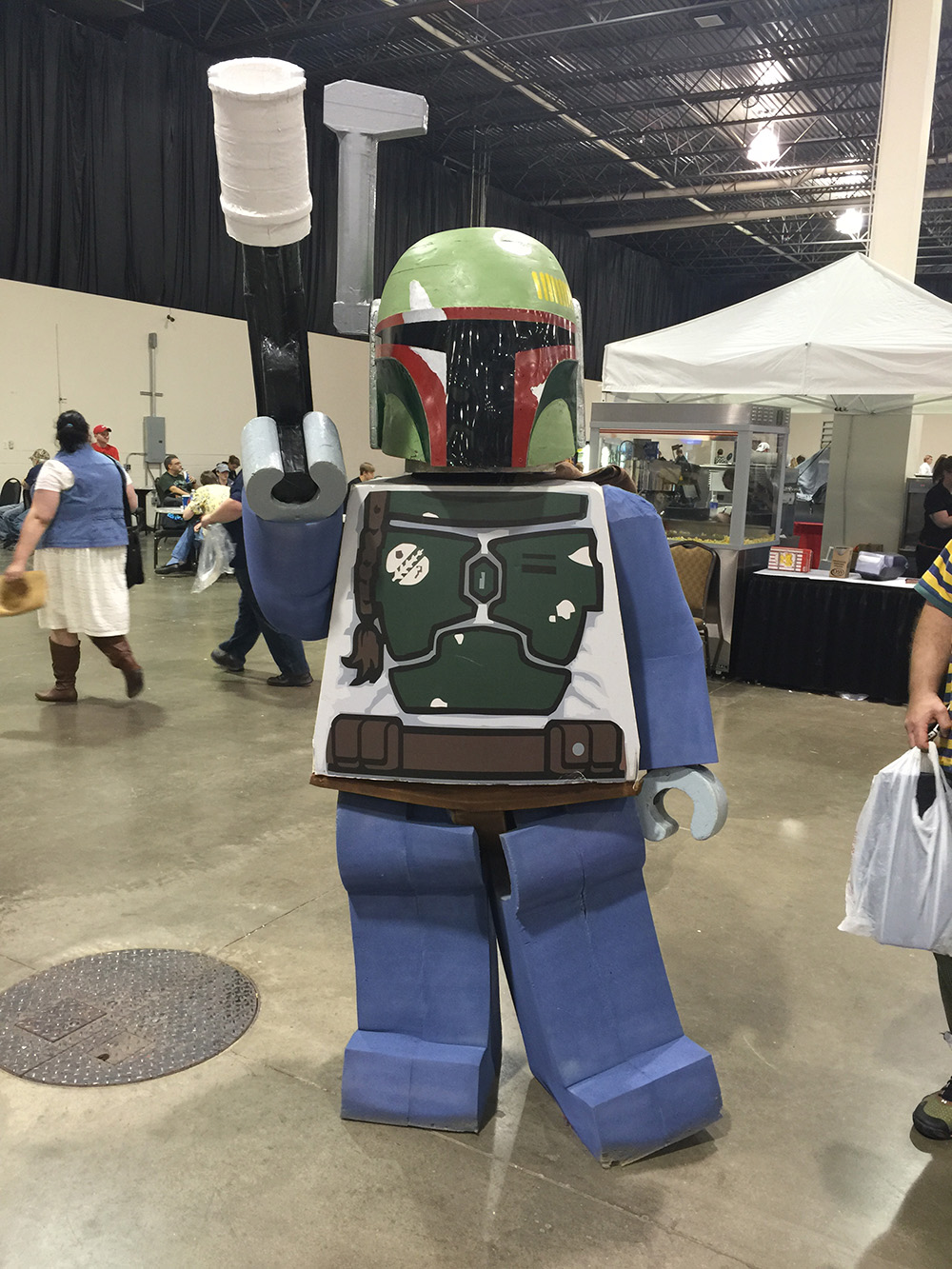 Motor City Comic Con is one of the bigger cons in the Midwest, and it’s also right in my neck of the woods. Getting to meet amazing artists, designers, actors and cosplayers is always a treat for me when I go. This year the show was the largest it’s ever been — hopefully they’ll move to a larger venue in downtown Detroit soon, as vehicle and people traffic was immense.

I felt it would be best/most fun to kick off the coverage from the weekend with some of the amazing things I saw at the show. Yes, there was WAY MORE COSPLAY, and I’ll try and dig that up, but this snippet will show some of the dedication of fans who I felt went above and beyond the cosplay call of duty to create terrific costumes. Above you’ll find an ingenious LEGO Star Wars outfit. I fully expect this Boba Fett to be ripped from a game or toy set. It was way really well done, though probably insanely hot inside.

Who shot first? You can never go wrong with Han and Chewie, especially after that trailer last month.

Tom Hardy’s interpretation of Bane was great (and so was his Mad Max, but we’ll get to that later this week), and these two gents took the dedication to craft up outfits that matched the beast of a man and the Scarecrow from the films.

You really can’t go wrong with Halo. It’s kind of a given at cons, next to quite possibly the greatest Mario cosplay ever:

Yes, this full balloon Mario costume — complete with Yoshi and skinny legs — stole the show. The head came off so that the young lady who crafted it could breathe from time to time, but the entire outfit wasn’t very limber; the rubbing, squeaking balloons were so loud that she could be heard from half a halfway away. No matter, this was absolutely phenomenal.

We took a look at some of the great items on sale, too, especially if they were game-related. Below is just a snippet of that, including works [name forthcoming!] that featured Assassin’s Creed‘s… assassins… rendered incredibly well.

The company also does these pretty rad portrait walls which feature just faces of characters.

And Samus, because we need a new Metroid.

This Tom Servo from MST3K Bots was a great (and affordable!) kit you can actually buy! DO WANT!

The folks at Hobbit Swords showcased a lot of replica weapons and items from the movies, but these helmets stood out to me for their intricate quality.

Were you at the show? Do you want to share your (SFW) photos in this gallery? Ping me at dali [at] sidequesting [dot] com and I’ll add them in. :)