I had no idea what to expect going into Pyre. Looking at the announcement trailer, it was easy to say “Oh, hey, Supergiant is making another one of those games,” and I’d be lying if I said I didn’t feel that way at first. But in my short time with the game, I found it to be not at all what I was thought it would be.

What I got instead was beautiful fantasy RPG that’s a weird mix of Transistor, Rocket League, Bastion, with some elements that wouldn’t feel out of place in a MOBA like League of Legends or DOTA, as well as some visual novel stylings in it’s storytelling. 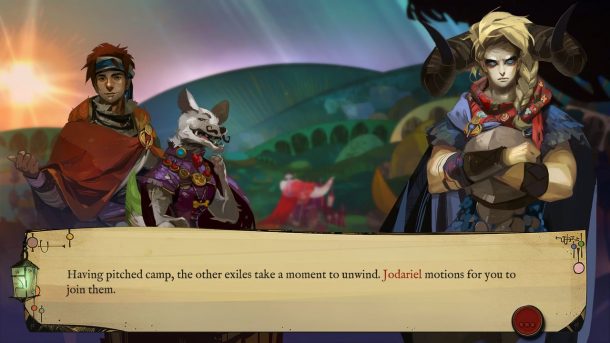 The game jumps right into its story by placing you in the role of a person cast out of society to live life as an exile out on the vast, purgatory countryside. Within minutes you’re picked up by another band of exiles who save your life, and afterwards, discover that you possess the rare ability to read. In exchange for that aid, your character, “The Reader,” agrees to travel with them and interpret a set of tomes that hold the instructions on performing “The Rites,” a ritual that will help them escape their purgatory.

Characters and writing have always been a strong point for the studio, and from what I could tell from my brief time with the Pyre, the characterization seemed to be on par with that of Supergiant Games’ other titles. All three of your traveling companions having distinct personalities, mannerisms and the like, and in style in tone were reminiscent of characters like Red from Transistor or The Kid from Bastion. That being said, there’s an overwhelming sense of deep-seated melancholy and hopelessness, which is reflected in vocal tone and dialogue from time to time. 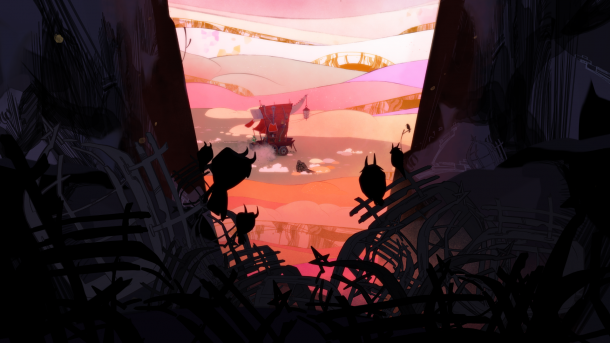 While much of my experience consisted of the game setting the stage for the story characters, at two points I was exposed to Pyre’s combat systems, and that is where things got interesting. It’s strange, but the combat feels completely new, but at the same time, feels like a natural progression from the studio’s previous games, except now simply killing your enemies isn’t the goal — combat takes place from a top down perspective overlooking the playfield, with The Reader calling the shots for the actions of their companions in a 3-on-3 three competition to control a central orb and dunk it on the competing team’s pyre while preventing them from doing the same.

Each pyre has a set amount of HP, and which character you use to make the final move into the enemy pyre determines how many hit points you chip off. Both teams have a heavy, medium and light character, each moving at speeds you’d expect for their weight class, and you’re rewarded more points for getting the bigger guys to the Pyre than if you just ran your nimble, smaller character there time and time again. 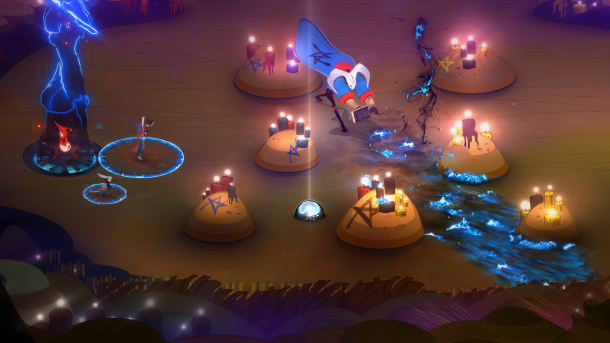 All of the players on the field also have a surrounding aura protecting them, which becomes an important offensive tool as much as is a defense. Any character holding the orb relinquishes their aura and becomes vulnerable to attack, so combat becomes an intense game of running up, temporarily banishing your opponents, snatching the orb and trying to make as much headway to their pyre before the cooldown completes and they spawn back in.

This is made more complex due to you only being able to move one character at any time, so I found myself quickly jumping back and forth between characters to maximize their specific abilities and manage cooldowns.

It’s really weird to describe a new game from the developers of Bastion and Transistornwith sports terminology, and I’ve heard it compared to the game of Quidditch from Harry Potter more than once, but I can definitively say that within minutes, everything fell into place and all skepticism went out the window as the game just clicked with me. Pyre is a strange chimera of a game that by all logic shouldn’t work, but it somehow does, and it’s beautiful in it’s own way.