Sometimes you just want to zone out and shoot aliens.

There’s no one reason behind it — it could be because the backlog pile is daunting, or you’ve been knee deep in Zelda for hours and your eyes are glassy, or you’re binging Marvel’s Defenders for some reason — you just want some snack gaming to pass some time. Classic arcade games are perfect for these kinds of situations. They don’t have a lot of mental strain, relying more on muscle memory than tactics or strategies, so they don’t force you to have to think.

Space Dave! doesn’t ask you to do any thinking. It just lets you push buttons and enjoy the scenery, no matter how often you’ve played this game before. 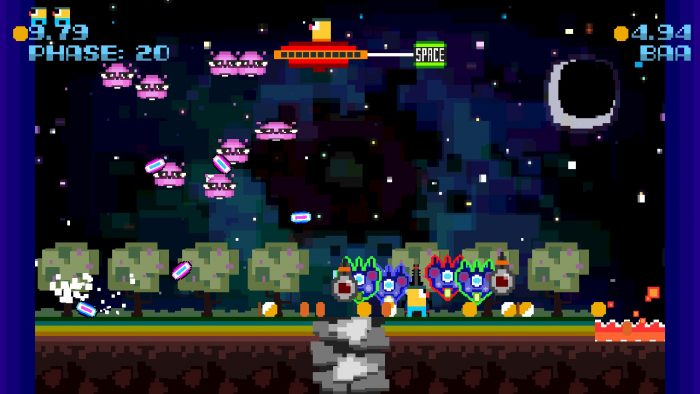 The Switch is no stranger to arcade games, though the vast majority are ports. Space Dave!, developed by MiniVisions and published by Choice Provisions, is an arcade game built on retro arcade principles. Or rather, what an Atari 2600 game game would be like if it was created today. The game is a classic-styled single screen alien shooter, drawing inspiration from Space Invaders and Galaga. It’s a hard format to mess up, but difficult to stand out from. Space Dave! follows the format faithfully, but doesn’t stray too much from that center. It’s exactly what you think, and won’t surprise you.

But it’s not trying to.

The game is built on a lot of repetition, and there’s little real variety. It’s just flashing lights, bright colors, lasers and an acceptable level of alien death. There are some environmental hazards, bosses, and level designs, but all that is mostly secondary. It wants you to power up and blow shit up. And that’s really it. Our drive to play it is to chase scores, hopefully up the game’s online leaderboards. The game also has local multiplayer, which is just as simple and chaotic, and it works well enough mechanically at its core.

Likewise, the art direction follows along with the retro feel. Big, blocky pixels and 8-bit bleeps and bloops feel like they belong on a big screen and stand out fine in the Switch’s portable mode. 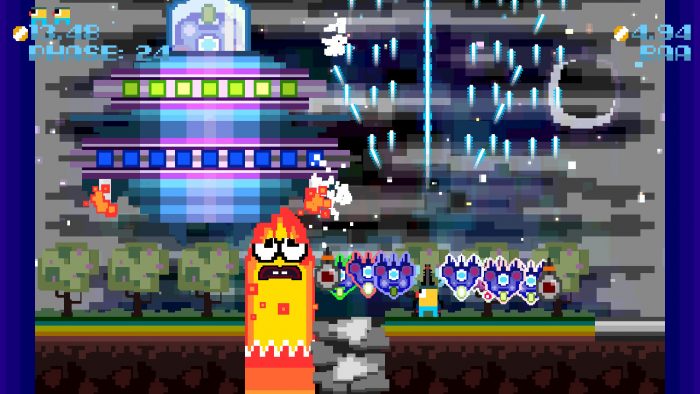 The more I write about it, the more I realize that there’s nothing special about Space Dave!, but somehow it still has a place on my Switch’s homes screen. I’ll pop it open when I’m deciding what I want to play next, just so that I can play something, and keep my console on. Space Dave! may not hold my attention for long, but it may help pass the time while I’m planning where to turn my attention to next. It’s like I’m chewing a stick of bubble gum, and I know the flavor is going to run out, but it’s actually pretty good for the 5 minutes I’m chewing it.

This Hot Take review is based on an eShop code sent to SideQuesting by the publisher.