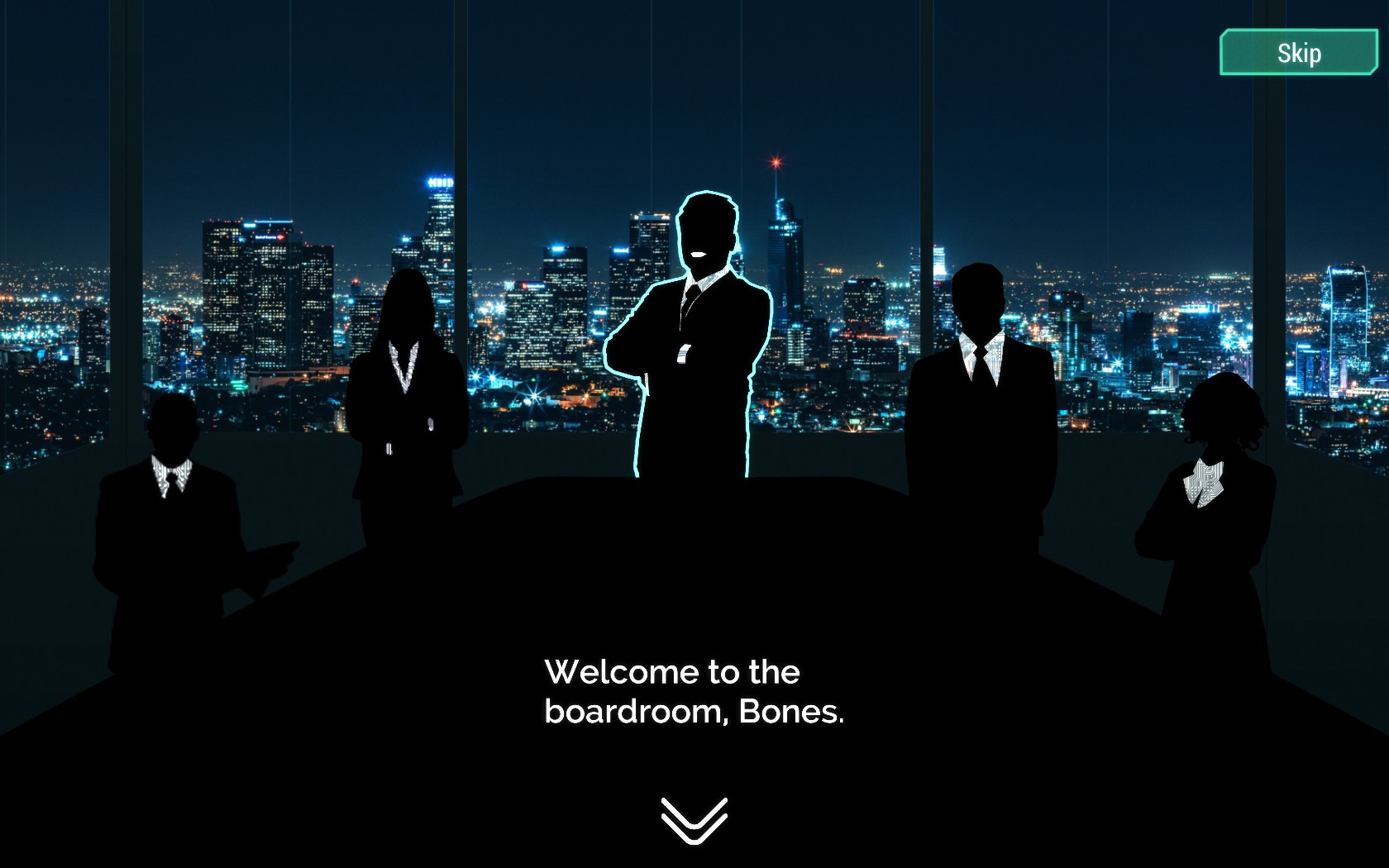 Spinnortality is a thing that caught my eye for one specific reason. In the world of cyberpunk video games you very rarely ever play as the bad guy — which is to say you very rarely ever play as the corporations. Cyberpunk, generally, sets you up as the scrappy underdog; the street level cyborg trying to cut out a little bit of comfort in the face of omnipresent, overwhelming odds stacked against you by massive, global mega-corporations.

In Spinnortality, you’re the scrappy underdog CEO of a corporation said to be pushing boundaries on the invention side of things, but failing miserably at the money-making part. And so the game opens with what is essentially The Illuminati, the heads of a bunch of mega-corporations, setting you up financially with the ultimate goal of figuring out how to let them live forever.

The gameplay of Spinnortality is deceptively simple. You hire workers and assign them to research new technologies in a tech tree, and as technologies are researched you launch them as products across the globe, which is broken down into a handful of countries which can have wildly different types of governments. Launching products makes money, keeping you afloat as you continue to research more things to launch more products.

Except researching a new technology opens up a list of ways to market these products as you launch them. Each country has different moral and ethical stances, and the goal is to launch a product in such a way that it most closely aligns with their desires and beliefs. The better you do, the more money you make. But before you can expertly exploit these countries, you have to perform focus tests to figure out which method will work the best. Performing these tests requires spending one of three resources which slowly build up over time, which are needed for other global events and crisis management scenarios as well.

Beyond that, sometimes a technology just doesn’t have an option that works especially well for a country. Worse than that, sometimes a country has laws preventing you from launching a technology there at all. This is cyberpunk, though, and you run a corporation. So you can put your resources toward overthrowing the government of a country, shoving it into anarchy, and then re-founding the nation under your control and more to your tastes, all in the effort to make a bit more money off of them.

All of this happens under the guise of a turn-based game. Deal with everything you can, hit the end turn button, and a month passes. As problems of ethics and funding compound, it quite quickly becomes a race against time to do everything you need to do — technologies lose money over time, which means if you aren’t constantly innovating and launching products, you’re gonna go broke. But if you’re constantly focusing on product launches, you might be missing out on global takeovers. It’s simple, and complicated, and ultimately fun.

The best part, though, is that loads of things that happen in the game prompt interesting little bits of flavor to appear. Newspaper articles about the rise of AI, or other companies working on moon colonization, or the dangers of gene-splicing. They often don’t matter, but they’re reminders of the fact that this is a cyberpunk setting, and you’re ultimately playing as the bad guy.

Sometimes playing as the bad guy is fun.