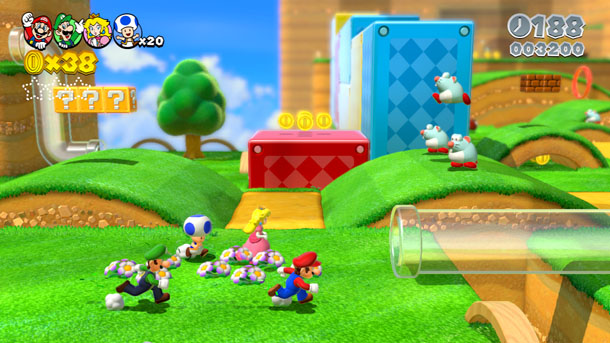 We didn’t necessarily fall in love with Super Mario 3D World back at E3. It looked like a neat idea, but the demo levels that Nintendo had available didn’t do much beyond take the 3DS game’s isometric viewpoint and add multiplayer and cat suits.

Color us much more excited now, after Nintendo’s latest Direct presentation and let’s play teasers. The latest Mario game, coming to Wii U on November 22, seems to feature all sorts of pretty bodacious things. For one, they’ve added a billion powerups. Bullet Bills, Goomba costumes, the Coin Blockhead from NSMB 2 and the big one: cherries. Cherries make duplicates of the characters, meaning that you can have five Luigis running around the screen if desired, and can control them to do some pretty insane group attacks and puzzle solving.

New “silhouette” levels are added, 3/4 twisted viewpoints, clear pipes, the return of the Boot suits, and a whole lot more have been mixed in for good measure. Going HD is also letting Mario look better than ever, as Nintendo’s EAD studio is using some of the great tilt shift effects found in Pikmin 3 to really bring some nice visuals to the game. Watch the trailer above or the Let’s Play below.

Our minds may be changing on SM3DW. For the positive.