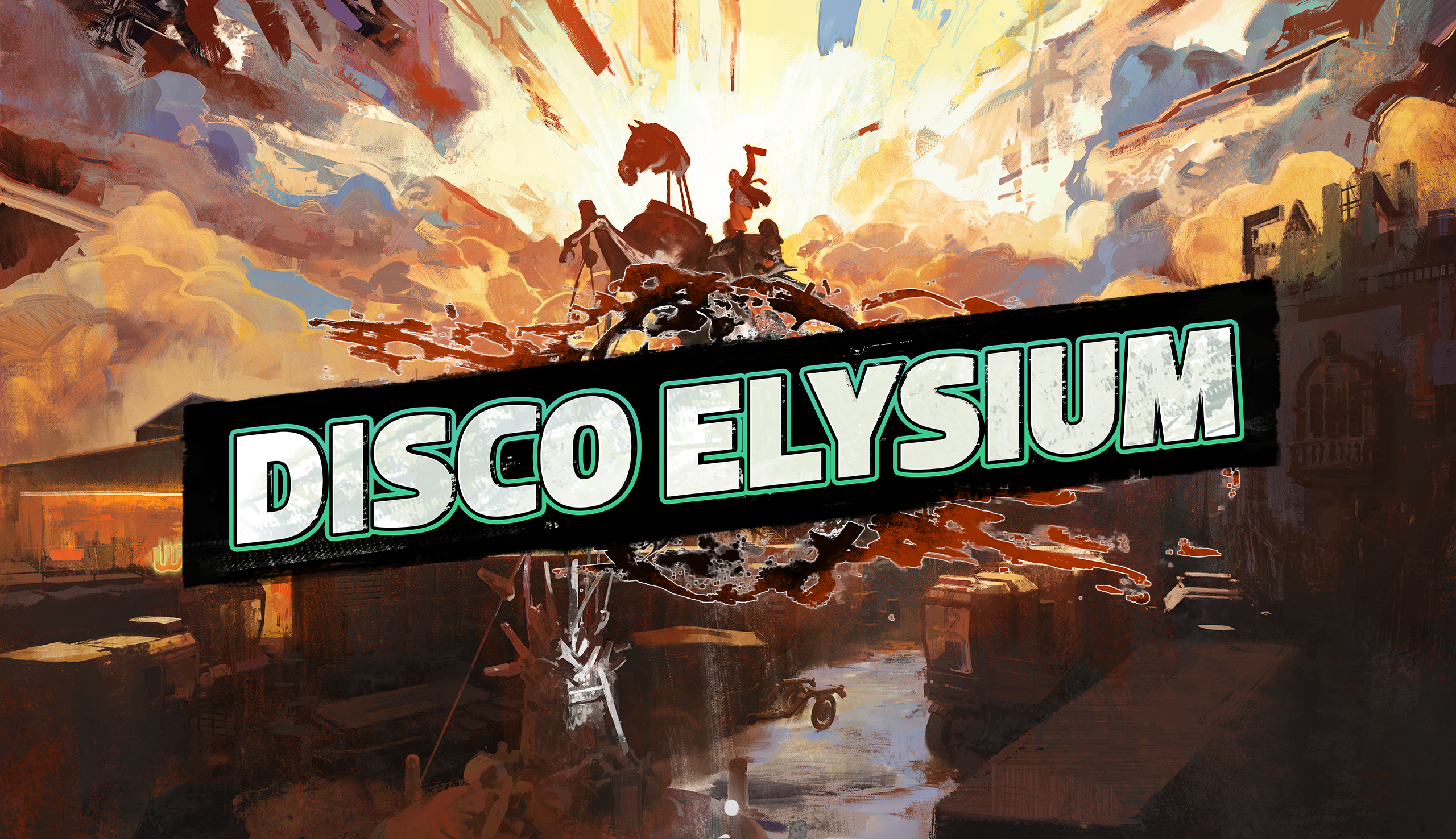 Disco Elysium is the perfect game. I’ve never played anything like it, nor do I expect to play something that comes as close to it again anytime soon. From the setting to the story there is an appealing tinge of grunge.

The city district of Martinaise is brought to life in expert fashion, each area has a distinct feel to it. The war torn Martinaise proper is the main hub you’ll be frequenting and you’ll eventually stroll into areas that are full of civil unrest due to a Union Strike, or seeping with historical intrigue. All of the characters feel hauntingly real with elaborate background stories that help inform every aspect of this same-but-different world. The City of Revachol, where Martinaise resides, exists in a balancing act between grounded real political theory and otherworldly weird fantasy shit. There are carefully crafted ten paragraph diatribes about Cryptozoology to extended conversations with yourself about economic systems, with a side of elaborate historical context provided by your partner to boot. Every pixel of Disco Elysium sings to me in a very personal way. Like, I’m currently in my last year of marketing school and I’ve taken two handfuls of business classes. I’ve struggled with a novel that’s about the free market capitalism in a fantasy setting. I’ve listened to tons of economic lectures and true crime podcasts. Having an expansive historically and politically rich world to explore that harbors these thoughts of mine is a cathartic and invigorating experience.

The world at large is simply one of the many characters you bump into on your journey to solve the murder of a Union Worker. Every single line of prose is dripping with context that helps you be informed and in turn helps you role play better. Role Playing is allowed (and expected) to an unmatched degree. The set up for the main story is one that we’re all familiar with, deja-vu. It’s twisted on its head here because sure you don’t know who you are but everyone else knows exactly who you are, what you are, and where you’re from, and they simply think you’re messing around when you tell them, “yo like I don’t remember ANYTHING”. You’re guided by your partner on the case, Kim, who acts as a siphon of information. Your weirdly worded chaotic questions are pushed aside by him as “your unconventional investigative methods.” Just giving the player this level of role play where you can craft this character to be who you want them to be on the INSIDE and how they react on the OUTSIDE is… game changing. At the start of a playthrough you get to pick from 24 different “skills” which are more like personality traits. In a more traditional RPG these traits would be party members, but Disco Elysium takes out the middleman and lets you craft your own consciousness. You can have good Hand Eye Coordination, so during a dialogue portion you can catch something a character tosses to you or even dodge bullets, all according to the dice roll. You can have other skills like Inland Empire, which let you get in touch with a more paranormal side. A skill called Shivers is probably my favorite one though; you’ll get random shivers while doing your detective work and have feelings of something happening across the island, which then play out in almost excruciating detail via dialogue between you and your Shiver personality. And then some skills, like Authority, are more straightforward. All of these abilities can be leveled up or increased by wearing certain pieces of clothing that have classic RPG +1’s. But instead of ATK or DEF, it’s +1 to Authority. There’s another mechanic where you unlock thoughts for your character to grasp onto, which you can put into your “Thought Cabinet,” and after a designated amount of time your character will have a full opinion of a variety of topics. These range from subjects about a dude you saw in a dream about your ex-wife, to communism. Each thought also adds or subtracts to your stats and can also open up dialogue options as well.

Every action has a dice roll you need to succeed at, and every result has a consequence to it in turn. When there’s a critical failure it will strike your morale or health. You can re-up your morale by taking drugs like magnesium though mid-encounter.  During dialogue the game is constantly checking your skills and if you succeed on one it will naturally pop up and give you information about the topic at hand. When I examined a beat up car on the road my Encyclopedia stat at its highest would know the exact make and model of it. During conversations with other NPCs you’ll be able to converse with these friends in your head that will feed you information, correct or not. A bad dice roll can lead to amazing results while a good one, typically akin to a paragon result might not even be the best for you. There’s such an acute eye for detail within the game’s design that you can’t help but feel okay with the results; like one time my characters morale broke and I ran away in shame, then had the option pop up of picking “flip the bartender the bird.” So I did, but when that happened my dude turned around and flipped off the bartender, crashing into an elderly patron at the hotel — who just so happened to be in a wheelchair and who also just happened to be apart of a very important quest line down the road.

Acceptance, I think, is the game’s core message. But I also think there’s about 50 other messages within the game that can be the core meaning as well depending on how you play. As you progress the murder mystery you’re presented with MANY situations where your character can feel like a piece of shit and you just have to completely accept it. Your morale will drop and you can fall over on the ground weeping, eventually blacking out. In fact, within the first minute you can die of a heart attack by reaching for the ceiling fan. I know you’re probably thinking that it sounds kinda crazy to play as a dude who’s the human representation of a boil but, actually, these situations lead to a weird degree of empowerment. I want to see him get better and I want to know who he REALLY is. BUT all of this is just how I felt while playing. The game doesn’t force you to think this way at all. The design inherently hinges on giving the player a wild degree of role-play. You CAN be a racist. You CAN be an asshole. You CAN beat everyone up. You CAN be a pushover. You CAN be a drunk. You CAN be a womanizer. Every possible outcome you CAN think of is there. The only hard guide lines that exist are quests which are literally just reminders. How you react and go about the quest can split and diverge multiple ways depending on your stats and what items you have and who you talked to prior. It’s on one hand daunting and on the other hand exhilarating to think that I can play through the game again and get an almost entirely different experience. I’ve already played through the game three times and besides a few key points down the path I’ve had drastically different experiences. My first playthrough clocked in at around 25 hours and my next two were around 18. For a game that is entirely just walking around and dialogue, that’s an impressive feat. The devs ZAUM boast that there are 1 million words within the game and I believe that wholeheartedly. As a person who has for so long seen marketing campaigns and dev interviews hyping up their games to an unrealistic degree it’s refreshing to play a game that does the wild things it claims to do on the box. Disco Elysium is the first real role playing game of the modern generation. In the past we had Planescape Torment as the monolith of RPGs that inspired the generations afterwards. Now we have Disco Elysium that has taken everything good about these last decades of RPGs, compounded them into one, mixed it with ingenuity and birthed a beautiful spectacle that will hopefully continue to strike aspiring writers and game devs with awe for many years to come.