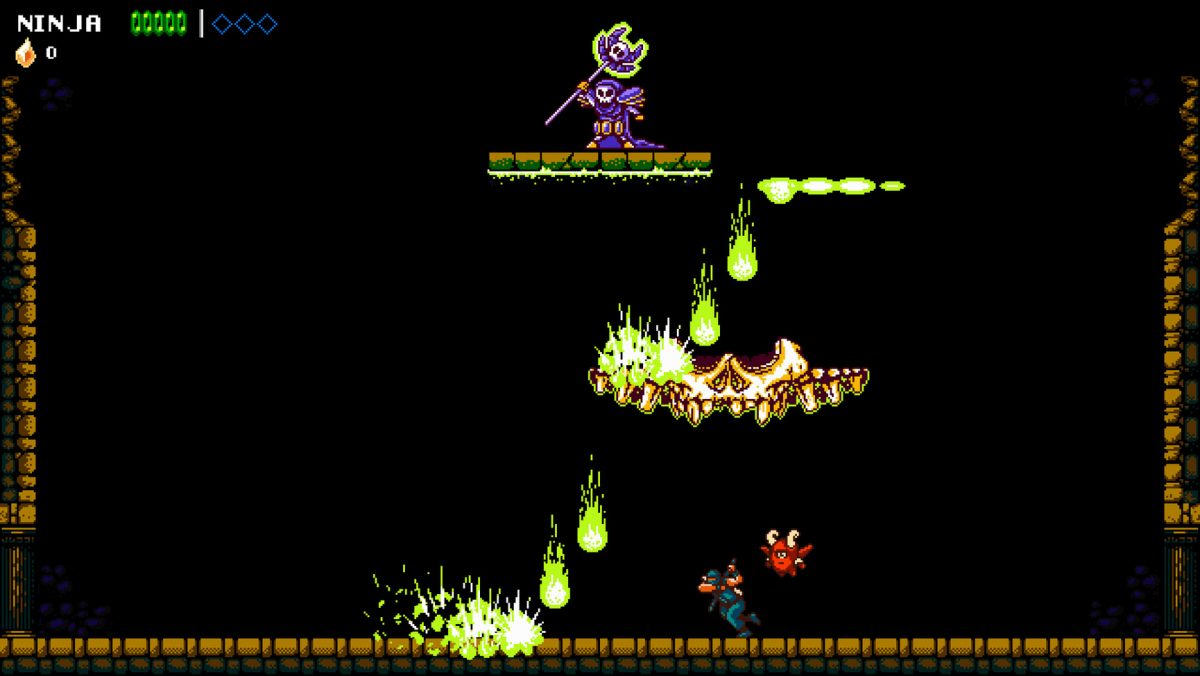 During the Summer of 1989, one video game essentially dominated our basement. Ninja Gaiden had us handing controllers back and forth between friends, expertly jumping across ledges, ogling our first stunning cutscenes, and dying when that fucking bird hit us.

But along with those nightmares came fantastic memories, thanks to generally terrific Eighties game design.

Getting my hands on The Messenger at PAX immediately brought back that feeling. Even though I was on a crowded show floor, it felt like I was transported back to the old days, experiencing that magic all over again. And, thanks to a great game design hook, that nostalgia didn’t wear thin.

The Messenger is the first game from dev house Sabotage, made up of several industry veterans. As an homage to that classic era, it’s created to please nostalgia, not necessarily try to replicate it. The developers are cognizant to focus on specific elements, while at the same time understanding that modern gaming demands different executions. One example is the death mechanic built into the game. Classic games relied on a set number of continues, whereas modern games let us play until we’re bored. To bridge that gap, Sabotage have built in a demon that appears once we die — and die I did, a lot. The demon buddy resurrects us, but doesn’t let us get away with a free pass. Instead, he follows us along, stealing any loot we pick up until he’s had his fill. The developers refer to it as a sort of dunce cap, but to me it realizes the idea of a death tax, forcing me to try and grab loot just to shake him off. It’s a neat idea and wouldn’t surprise me if it were copied by other games.

At first glance it’s an 8-bit platformer, taking place in a feudal Japan infested by demons, in which we wall jump, slash, and throw stars to take down enemies. Much like the tropes of classic games, one heroic ninja is fated to rescue the world. That’s where we come in. We are not that ninja. We are another ninja, instead tasked with delivering a message to elders as we seek help. We are a mailman.

Traditional gaming tropes will suggest that we rise up and become powerful as we carry out our task, and we do, but not before the game takes a magnificent turn: it becomes 16-bit. That’s when all the craziness opens up, changing both visuals and audio, and including world shifting puzzles that require us to jump between the generations.

The show floor demo at PAX drops us in the beginning of the game to get us used to the controls,  which are really at the heart of the game, including the cloud-stepping ability. In leu of including double jumps, which are typically tied to more modern games, the developers included the ability to gain an extra jump after the successful slash of an enemy or lantern. It’s a little tricky at first (I found myself falling quite often) but with enough practice it becomes accessible to speed-running; in theory, you can basically stay in the air the entire length of a level if you time things right. This emphasis on controls is very much an homage to classic gaming, where visuals weren’t as important (or capable) and developers needed to rely on working with a minimal amount of buttons to make an experience flexible.

But that’s where The Messenger seems to shine. The demo eventually fast-forwards us to a point somewhere in the middle, where the 16-bit realm becomes accessible through tears in space-time and puzzles rely on our ability to switch back and forth to solve puzzles. This lets us see the effect of both console generations on the experience. In one section I hop across a platform in 8-bit, stopping before I fall to my death at a pit, before leaping through a tear to 16-bit, in which the platforms have adjusted and floor spikes removed. A moment later I jump back into 8-bit and am able to drop down through a couple of floors to a new area. 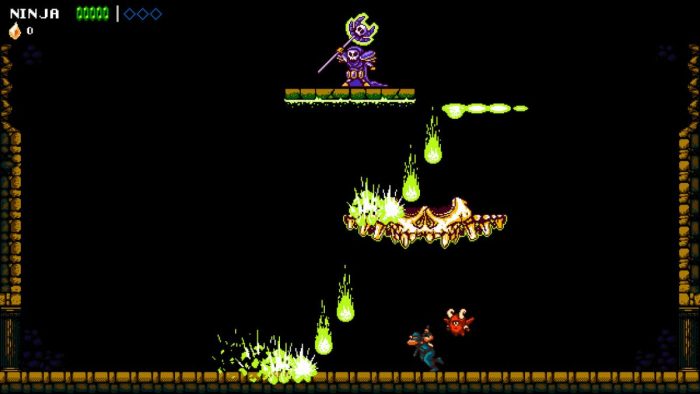 The flip back and forth isn’t at will, instead relying on set points, so it’s not quite like Super Mario Maker’s jump across sequels. However, it is unique and lets us see how problems and opportunities would have been approached by developers during those separate eras. This plays with our expectations, as just when we think something is about happen, the switch to the other bit generation brings us something completely different. It also means that the game becomes a sort of soft Metroidvania, asking us to grab new skills and revisit paths to open new areas that we missed while in 8-bit the first time.

If it can maintain the smooth design of the show floor demo, The Messenger has the potential to become an instant classic. Look for it later this year on PC and Switch.